Brad Keselowski staved off a major pile-up and stiff competition to win the NASCAR Sprint Cup race at Daytona, putting him top of the Chase grid.

The determined Penske driver moved up from fifth into the front two rows of the drafting pack early on and held his position, despite suffering overheating trouble after debris got caught in his Ford’s radiator on lap 63 of the planned 160. He took the lead from Denny Hamlin just past half-distance and only occasionally lost it to the aggressive challenges of Kurt and Kyle Busch and teammate Logano.

Starting the tense final lap, Keselowski led a three-wide team of pursuers that then lost a follower when Kurt Busch spun out at the final turn. His brother Kyle, Trevor Bayne and Logano followed Keselowski over the line. 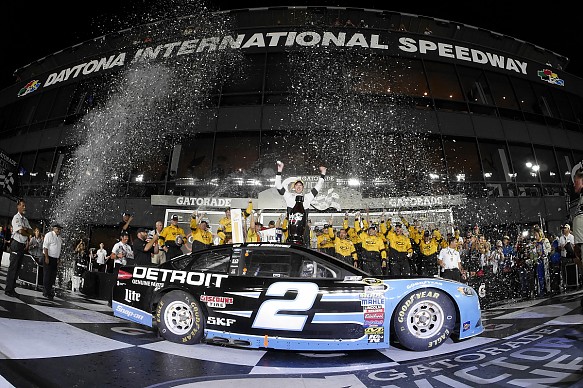 It wasn’t made official until he crossed the finish line but Keselowski actually won the Coke Zero 400 thanks to a daring pass of Kyle and Kurt Busch with 16 laps remaining.

Keselowski was riding third on the outside line behind both Busch brothers on lap 144 when he executed a top-to-bottom cross-over to get in front of Kurt and under Kyle. Once he completed the pass for the lead, Keselowski was able to protect it and survived NASCAR overtime to take his first career triumph at the “World Center of Racing.”

Busch has now finished second to Keselowski in each of the past two restrictor plate events and the defending Cup champion could only give credit where it was due.

“It seemed that Brad just had way more maneuverability than anybody – but especially more than I did,” Busch said. “I don’t know how he got the kind of run that he got, but when he got it down the frontstretch getting into Turn 1 and was able to turn to the bottom … my car would just be loose doing that. Mine would over-rotate on me and I just never had the opportunity to try that.”

Busch thinks he maybe could have tried to block Keselowski but suspects it would have resulted in a crash.

“You know, I could probably have turned down a little quicker but I probably would have got turned and that wouldn’t have been good for anybody.”

Keselowski’s constant presence up front saved him from getting caught up in a major incident just over halfway through, caused when Jimmie Johnson slid his Hendrick Chevrolet across the track and collided with Jamie McMurray, taking out half the pack.

After contact with the Ganassi driver, Johnson lost the back end, spun and set off a crash that involved 22 cars, resulting in several retirements including Chase Elliott, Kevin Harvick and Paul Menard.

Harvick experienced the worst of the incident when Brian Scott’s Richard Petty Ford flew over his windshield and took them both out of the race. Scott described the crash as “one of the more wild wrecks” he’s been involved in.

Polesitter Greg Biffle also lost out heavily during the pile-up, restarting in 23rd and then receiving a penalty during the next round of pit stops for having too many crew members over the wall. Despite that, he bought his Roush Fenway Ford home to finish eighth.

Last week’s surprise Sonoma winner Tony Stewart had his hopes dashed late in the night when his Chevrolet suffered from oversteer with 12 laps left and he overcorrected, causing him to drift sideways and catch the cars of Casey Mears and Carl Edwards before cruising to a stop and retiring.