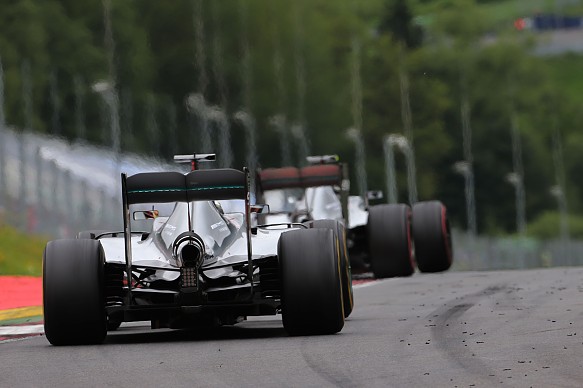 Lewis Hamilton believes he left Mercedes Formula 1 teammate Nico Rosberg plenty of room to avoid a crash when they came together on the Austrian Grand Prix’s final lap.

Hamilton got a run on Rosberg on the outside approaching Turn 2 and was ahead as they turned in, but Rosberg stayed on a wide line and contact was made.

“We were racing right until the last lap,” said race winner Hamilton. “He made a mistake, clipped the inside curb and went wide [at Turn 1].

“I got a good run up on him. Up to Turn 2, he blocked the inside, the only place I could go was the outside.

“I was on the racing line. He was in my blind spot so I assumed he was still there, so I went very wide.

“I left him plenty of room, as I started to turn as I was at the edge of the track. He collided with me.”

Rosberg is under investigation over the incident – both for the contact and for continuing to finish fourth with his damaged front wing folded under the front of his car. Hamilton insisted the Mercedes team debrief would be “pretty straightforward.”

“I don’t think anything will be said,” he continued. “I don’t have a great picture of what went on. I know where I was on the track. But there is no problem –we were racing hard. Sometimes these things happen.”

Hamilton also shrugged off the booing he received from some sections of the crowd on the podium.

“Of course it’s not great, especially with how much I love it here,” he said. “But I forgive them. They have the right to have an opinion.

“I’m not sure why they have done it, but it doesn’t really make any difference to me. I won the race fair and square.”