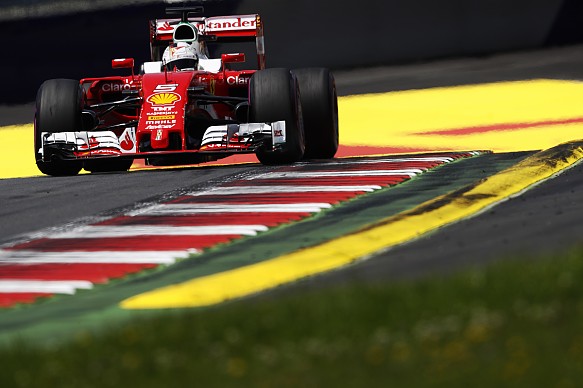 Vettel clocked a 1m07.098s on the ultra-softs, 0.136 seconds clear of Raikkonen with Lewis Hamilton just under a tenth further back in third.

Reigning champion Hamilton ran wide at Turn 8 early in the session and radioed his Mercedes team complaining about his rear tires, which looked to be badly blistered. After a long stint in the garage, he returned to the track for his qualifying simulation, but had to abort his run when the session was red-flagged after Rosberg crashed.

The championship leader ran onto the curbs on the exit of Turn 2 with the left-rear tire vibrating heavily. The suspension then appeared to fail, pitching him into the barriers nose-first before he rebounded back onto the track.

Mercedes is investigating the issue and now faces a race to get the car fixed in time for qualifying later on Saturday afternoon. As Rosberg was unable to complete a low-fuel run at the end of the session, he ended up bottom of the times.

After a 10-minute stoppage, the session restarted with drivers left with just 12 minutes to complete their qualifying simulations. Vettel was first to set a lap time and promptly went quickest while Hamilton’s first effort was 0.656s off the pace.

After a cool-down lap, Hamilton improved to a 1m07.308s but could not make any further inroads into Vettel’s leading time.

Red Bull’s Daniel Ricciardo was fourth quickest, half a second off the pace but a tenth quicker than teammate Max Verstappen.

Valtteri Bottas ruined his final run when he pushed too hard into Turn 8 and spun but was still sixth, a fraction ahead of Williams teammate Felipe Massa.

Nico Hulkenberg, Jenson Button and Fernando Alonso, who lost a piece of bodywork from his McLaren when he clobbered the aggressive yellow curbs late in the session, completed the top 10.