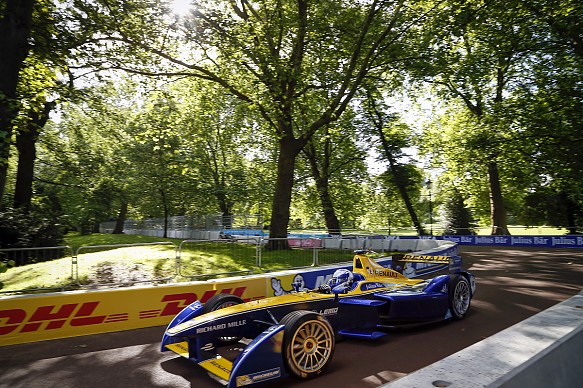 Nicolas Prost took his first Formula E win of the season in Battersea Park on Saturday, while title rivals Lucas di Grassi and Sebastien Buemi battled in the pack.

While Renault e.dams driver Prost controlled the race from the front, di Grassi and Buemi engaged in a simultaneous rise up the order after qualifying mid-grid. They fought wheel-to-wheel in the second half of the race, with di Grassi holding firm to eventually finish fourth behind podium finishers Bruno Senna and Jean-Eric Vergne.

Di Grassi and Buemi started 10th and 12th but by the second lap ran ninth and 10th. Abt Audi Sport driver di Grassi tried to put a car between them by passing Nick Heidfeld’s Mahindra on the third lap, but Buemi followed him a lap later.

Di Grassi was handed a reprieve when his teammate Daniel Abt handed him seventh, and the German provided the perfect rearguard action over the next dozen laps.

While di Grassi made his way past Sam Bird into sixth, Buemi was repeatedly frustrated by Abt, who was warned for more than one change of direction in his defense. Buemi broke the resistance before the car swaps, and when Bird pitted a lap earlier than most the title rivals were nose to tail again. They passed Andretti’s Robin Frijns after the stops to take fifth and sixth, before a safety car was required when Abt collided with Frijns and took them both out.

A small amount of rain threatened to make things trickier but it did not fall hard enough or long enough to have a lasting impact.

Shortly after racing resumed with just over a dozen laps remaining, di Grassi tried to pass Vergne at Turn 8 but hit the DS Virgin car, sending it sideways and forcing Buemi to briefly stop behind. They resumed in the same positions, with di Grassi – who broke his front wing in the incident – then having to repeatedly rebuff Buemi’s advances.

Buemi tried to use Fanboost to pass di Grassi and twice attempted a bold move around the outside of his rival at the Turn 11/12 chicane, but was unsuccessful each time.

His aggression proved his undoing with that final attempt when Bird slipped past at the Turn 14/15 chicane for sixth with two laps to go. Buemi was furious because Oliver Turvey had crashed his NEXTEV TCR car out of third place and the yellow flags had been thrown, but Bird did not hand the place back.

The Briton did lose out at the last gasp, however, after what looked like the loss of his last remaining energy on the run out of the final corner. That promoted Buemi to fifth – meaning di Grassi holds a three-point lead ahead of the championship decider, with Antonio Felix da Costa nicking sixth from Bird as well to complete a fine rise from 14th on the grid.

The final race of the season is scheduled to take place at 4 p.m. local time on Sunday.