FE: Prost on pole, title rivals down the order

FE: Prost on pole, title rivals down the order 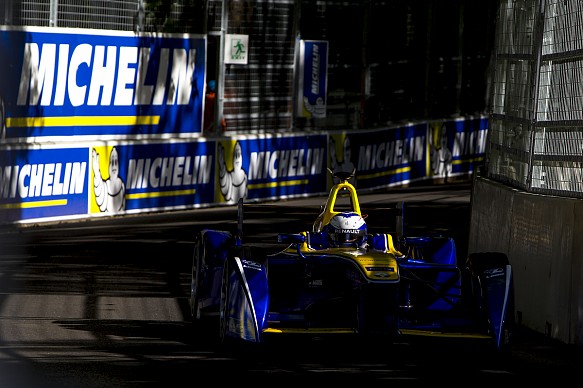 London’s summer sun has been interrupted by inclement weather in the build-up to the season finale and heavy rain fell halfway through the session. Seven drivers had set dry lap times at that point, with di Grassi and Buemi drawn in the third of the four groups and facing a wet track.

Points leader di Grassi posted a time a second quicker than Buemi to earn 11th, with Jerome d’Ambrosio and Ma Qing Hua as a buffer between the two.

With the track drying quickly, Prost had the advantage of running last after topping the group phase, and duly took his first pole of the season with a 1m27.192s.

Mahindra driver Senna will join the Frenchman on the front row of the grid after securing his best qualifying result in FE. Turvey claimed a shock third with NEXTEV TCR thanks to the changing weather, with Frijns fourth for Andretti.

DS Virgin Racing’s Vergne did not take part because he crashed on his 200kW lap in qualifying and the car was too badly damaged to run again, but he was fortunate to get away with setting a banker lap good enough to comfortably see him through thanks to the rain.

Daniel Abt was the quickest of those who set their times after the rain fell and will start sixth.

Sam Bird, Stephane Sarrazin – another who got away with a crash on his full-power lap thanks to his banker in the dry – and Loic Duval complete the top 10 on the grid.

The final weekend of outgoing champion Nelson Piquet Jr.’s miserable title defense started with misfortune. While teammate Turvey made it through to the superpole Piquet was in the final qualifying group and unable to set a time on the drying track after a problem.

He will line up 17th, ahead only of Simona de Silvestro who was on track immediately after the rain fell and spun into the wall on her out-lap.