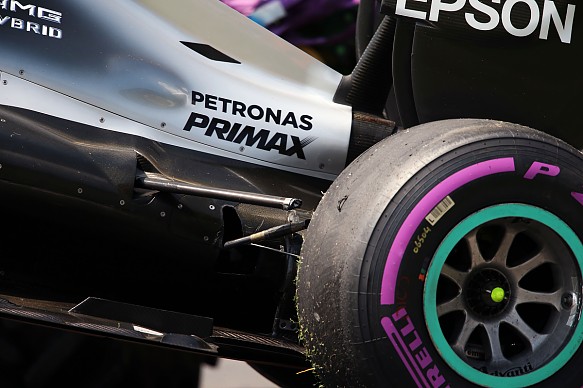 The Mercedes Formula 1 team has strengthened Lewis Hamilton and Nico Rosberg’s rear suspension for the Austrian Grand Prix after Rosberg’s crash in practice. Mercedes has fused together strips of carbon fiber to form a bond and wrapped tape around it to form a strengthened section it can attach to the suspension.

The championship leader was sent into the barriers when his left-rear suspension broke on the exit of Turn 2 in final practice.

Mercedes motorsport chief Toto Wolff said an unusual load on the suspension had triggered the failure.

“The strange thing is at the beginning [of FP3] we had spikes of loads, but once we analyzed the data there was not much load on the suspension,” he explained. “So it is some kind of strange frequency or oscillation on the tire that made the suspension break, and we don’t know what it is.

“It looks like it’s the red curbs, that are new, which trigger it. But no answers yet.

“What we have done is strengthened the suspension. Whether it’s the ultimate cure, I doubt it. It is a concern.”

Wolff said that showed changes to the Red Bull Ring’s new curbs were necessary, but admitted it was hard to know the right solution.

“I don’t know what the FIA is going to decide, whether they are going to take the sausage curbs away, or modify some of the red curbs – scratch them, or fill them with concrete,” he said. “But we have seen a couple of failures on various cars with various suspension designs and it still failed, so there needs to be a reaction.

“We discussed during the session actually that we need to react quick with Charlie [Whiting], but it is not an easy one.”

Rosberg had to take a gearbox-change penalty due to the damage sustained in the crash and consequently falls from second to seventh on the grid. The team managed to repair the car in time for qualifying and he said it had not affected his performance.

“It just breaks the rhythm a little bit and that’s it,” said Rosberg. “I didn’t have the opportunity to practice my qualifying in FP3 as a result.

“It’s small things that just make it a bit more difficult. But I felt confident straight away in qualifying and was able to attack, so I found the rhythm very quickly.”