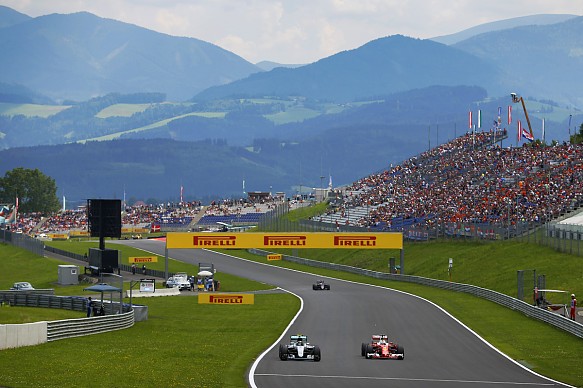 Nico Rosberg will only drop four places on the grid for the Austrian Grand Prix despite being handed a five-place penalty for a gearbox change.

Mercedes was forced to give Rosberg a new gearbox ahead of qualifying following his crash in final practice at the Red Bull Ring. After then qualifying second behind teammate Lewis Hamilton, the five-place penalty was initially thought to have dropped Rosberg to seventh. However, with Sebastian Vettel also collecting a five-place penalty for a gearbox change on his Ferrari, he drops from his fourth place in qualifying to ninth.

With all penalties being applied at the same time, rather than in the order that they were incurred, Rosberg therefore only drops to sixth.

As a result of those penalties near the front of the field, Force India’s Nico Hulkenberg moves up second alongside Hamilton, with McLaren’s Jenson Button third and Ferrari’s Kimi Raikkonen fourth. Daniel Ricciardo claims fifth position, with Rosberg then sixth.

Valtteri Bottas will start seventh, followed by Verstappen and Vettel, with Felipe Massa completing the top 10.

At the rear of the grid, Jolyon Palmer, Rio Haryanto and Felipe Nasr were all handed three-place penalties by the stewards for failing to slow for yellow flags after Carlos Sainz Jr. pulled off track with a blown engine.

With Nasr qualifying last anyway and unable to drop any further on the grid, it effectively results in only two-place penalties for Palmer and Haryanto, who drop from 18th and 19th respectively to 20th and 21st.