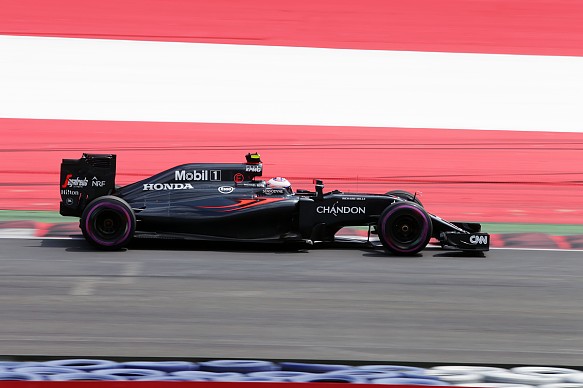 Jenson Button described the fact he will start Formula 1’s Austrian Grand Prix from third on the grid as ‘madness’ after he starred in a weather-affected qualifying.

The McLaren driver was fifth fastest in Q3, which will become third as a result of grid penalties for Nico Rosberg and Sebastian Vettel for gearbox changes.

“It feels like a pole position for me. Whatever happens tomorrow, we’ll enjoy today.”

Button said he took a risk with his strategy on the drying track in Q3, waiting until his final lap on slicks to really push for a quick time.

“We were never going to qualify fifth in a completely dry session but in these conditions we could,” he said. “We called it just right – it worked today. In a way I took a lot of risk because I saved everything for the last lap and there could have been a yellow flag, but it was worth it.

“We’re not fighting for a podium here. I’m not being pessimistic, I’m a realist. I understand it’s going to be a difficult race for us wherever we start, but hopefully it will be a lot more fun than we are used to.”

While Button made it into Q3, his teammate Fernando Alonso was unable to reach the top 10 and he blamed a tire mix-up for the missed opportunity.

“We knew the threat of rain, so we tried to do our run quickly in Q2,” said the Spaniard, who qualified 14th. “Unfortunately, when we took the tire blankets off it was the old tires from Q1, not the new tires. That was a surprise for me, and when we put the new tires on we had some yellow flags so we aborted the lap.”

When asked if the team explained the error to him, Alonso said: “We were in a hurry from Q1, a stressed moment, a rain threat. There are some races that we are doing small mistakes.

“We are not very competitive, so if we don’t execute well it makes it even more difficult.”