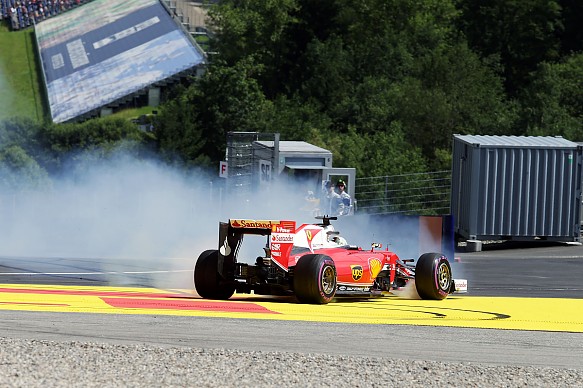 Sebastian Vettel says he was caught out by an issue with his Ferrari’s brake bias in his late spin during Austrian Grand Prix practice.

The four-time Formula 1 world champion lost the rear of his Ferrari entering Turn 2 with two minutes to go, spinning across the asphalt run-off and into the gravel, pulling up just before the wall.

“We had an issue with the brake distribution, which caught me by surprise,” he said. “We lost the last couple of minutes, but it didn’t make too much of a difference.”

Vettel was fourth in the afternoon session and third on Friday morning, finishing both six tenths off the pace set by Mercedes’ Nico Rosberg. He described his day as “decent” overall, but noted the rain that hit the Red Bull Ring during second practice hid the full picture.

“[It’s] not entirely clear where we are because we didn’t have much running, in the afternoon in particular, but overall we should be OK,” he said.

Teammate Kimi Raikkonen followed Vettel out as the first drivers to switch back to slick tires after the rain on Friday afternoon.

Having been fourth-fastest in the morning, Raikkonen was eighth in FP2, but only two tenths behind Vettel in a congested order behind the Mercedes pair at the top. Raikkonen spun at Turn 5 at the start of the session, but returned to the track via the escape roads.

“It was quite a messy day, but overall I had good feelings,” he said. “In the morning we managed to have a few runs while in the afternoon, because of the weather conditions, we did not get to do many laps and never really got a proper qualifying simulation done.

“The day could have been a lot better, the situation now, it’s a bit unknown; but it’s not too bad either.”