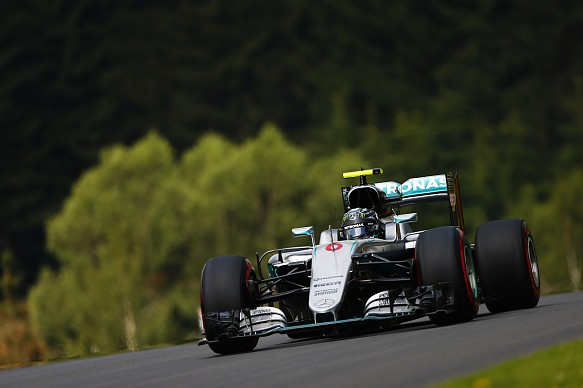 Hamilton set the early pace on the super-soft tires but was then usurped by Rosberg, who went 0.642s quicker. Hamilton then had a spin at Turn 3 and as his car slid back onto the track, Romain Grosjean spun to the inside to avoid contact.

When attention switched to the ultra-soft tires, Rosberg improved his leading time to a 1m07.644s and then after a cool down lap went nearly three tenths quicker again. Rosberg, whose leading time was 1.1s quicker than last year’s pole lap, then had an off-track excursion when he slid into the gravel at Turn 3 before rejoining.

Kimi Raikkonen was fourth quickest, two tenths slower than teammate Vettel, who did not run the second-generation halo cockpit protection device as anticipated.

Red Bull’s Daniel Ricciardo, one of a number of drivers to skate off track, was fifth having set his time on the super-soft tires and Carlos Sainz Jr. sixth.

Ricciardo survived a wild moment as Marcus Ericsson got sideways as he tried to stay to the inside of Turn 8 to take the pit entry and slid his Sauber across the white line. The Australian, who was on the outside, got out of shape and took to the run-off, saying on team radio that “it wasn’t his fault” but Ericsson was put under investigation by the stewards.

Felipe Massa was the leading Williams in seventh, ahead of Red Bull’s Max Verstappen, who had a messy session. The teenager lost his left-front endplate after bouncing over the raised exit curb at Turn 8 and told his team the curbs were “dangerous.” He then ran wide and hit them again at Turn 6, damaging his steering, which sent him into the gravel to end his session early.

Daniil Kvyat and Valtteri Bottas completed the top 10. Grosjean made a late improvement to move up to 11th, ahead of Nico Hulkenberg and the two McLarens of Jenson Button and Fernando Alonso.