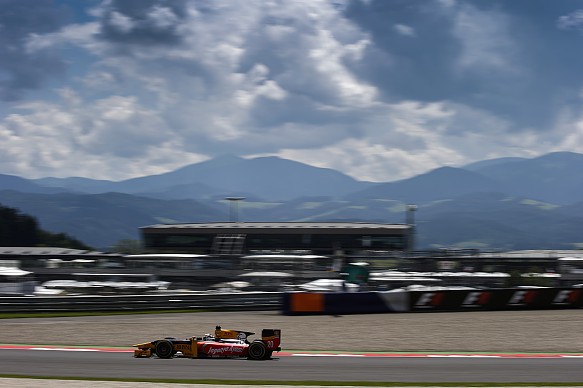 Baku double winner Antonio Giovinazzi kept up his run of form by setting the fastest time in free practice for the GP2 Series round at the Red Bull Ring.

The Italian leapt from seventh to first with a blistering lap in his Prema Racing car with just one minute remaining on the clock, heading teammate Pierre Gasly by three tenths of a second.

Giovinazzi needed three tries to get his lap in. At the first attempt, he was up on Jordan King’s session-leading time when a full-course yellow was called because Mitch Evans had been flicked towards the barriers – stopping inches short – by the exit curb at Turn 1, and Nabil Jeffri then spun under yellow flags.

As the session went green, Giovinazzi was then baulked by an unhelpful Sergio Canamasas, before finally unleashing his 1m13.922s standard setter the following time around.

On the final lap Giovinazzi launched himself over the Turn 1 curbs, meaning the Prema team will need to check the car for damage.

“I had a lot of traffic, but I tried to push as much as possible and the car was fantastic,” said Giovinazzi, who took his first European Formula 3 win at this track in 2014. “I put the whole lap together and got the time, but now we have to do the job in qualifying.”

Gasly briefly went top in the final two minutes, only for Giovinazzi to further lower the target time.

King’s effort ended up good enough for third, which was a good result after he lost the early stages due to a rough-sounding engine in his Racing Engineering car.

“I don’t know what it was, but the GP2 guys came over and I was back out within 10 minutes,” said the Briton.

Raffaele Marciello moved up to fourth on the final lap in his Russian Time entry, narrowly pipping championship-leading teammate Artem Markelov, who was third until the final few minutes.

Another final-lap improver was Luca Ghiotto, the Trident man putting himself ninth, while Carlin’s Marvin Kirchhofer rounded out the top 10.

Other incidents included a spin for Nicholas Latifi at Turn 8 that caused an FCY early in the session, although the Canadian eventually got going again, and a red flag just over halfway through the session after Gustav Malja’s battery exploded and stranded the Rapax machine on the track at Turn 3.