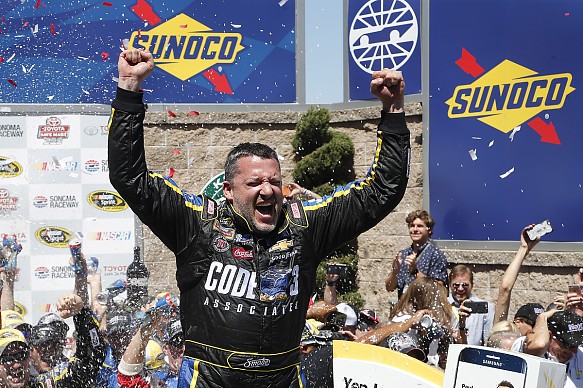 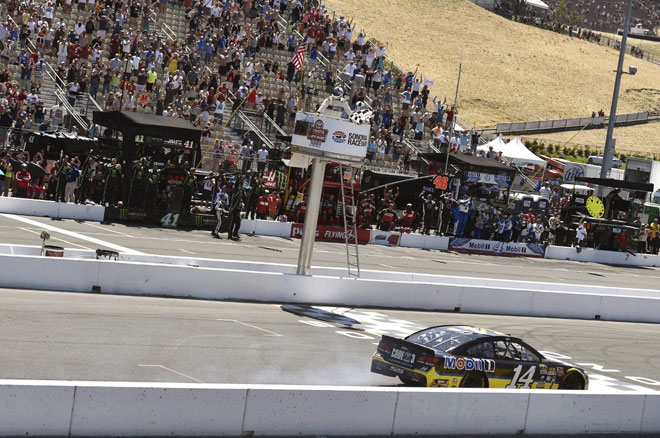 Having qualifying 10th before dropping down the order in the middle of the race, Stewart chose to make an early final pit stop to pre-empt a potential debris caution.

The yellow came and Stewart stayed out as all the front-runners pitted, enabling him to take the lead with 20 laps to go. With the bunched-up pack behind him, the Stewart-Haas Chevrolet driver made it through another caution and restart in the lead when Michael McDowell parked his car on the side of the track.

After holding out until the final lap, it looked like the win was lost when Hamlin took Stewart on the inside to steal first place, before Stewart snatched it back with only two corners to go.

The win was Stewart’s first since June 2013 and gave him hope of reaching the Chase in his final season before retiring.

“Especially at a place you’re going to for the last time, it means a bunch,” Stewart said. “It’s special, trust me.”

“I made mistakes the last two laps,” Stewart admitted. “I had just a little bit too much rear brake for Turn 7, and wheel-hopped it two laps in a row. But, I felt a nudge when I got down there and (Hamlin) knew where it was and he did the right thing doing it there; but if I could get to him, he knew what was coming. He told me he was proud of me. He knows what it means. We were teammates for a long time and we respect each other a lot.”

“Tony has been ultra-fair to me quite a bit,” said Hamlin. “He’s treated me really well my entire career. It’s not like I gave him one by any means. He gave us an opportunity to move him, we did, and then we got it back. It’s just part of the deal.”

Having missed eight races at the start of the year due to back injuries from a pre-season dune buggy crash, Stewart must get into the top 30 in the championship to be Chase eligible regardless of his win status but the Sonoma victory brings him up to 32nd.

The closing lap fight livened up an otherwise uneventful race. Martin Truex Jr. joined Hamlin in pressuring Stewart before contact between them with eight laps to go.

Road course expert AJ Allmendinger was a contender for the win before receiving a penalty for an uncontrolled tire at his final pit stop. It set him back to 35th but he made it up to 14th by the time the flag fell.

Kurt Busch had a disappointing race, struggling with a car that swung toward oversteer and losing six places from his qualifying position to finish 10th.

Aside from the McDowell caution and two for debris, the only other yellow came when Clint Bowyer’s HScott Chevrolet caught fire due to an electrical problem just six laps into the race.