MOTOGP: Lorenzo 'probably slower than ever' at Assen

MOTOGP: Lorenzo 'probably slower than ever' at Assen 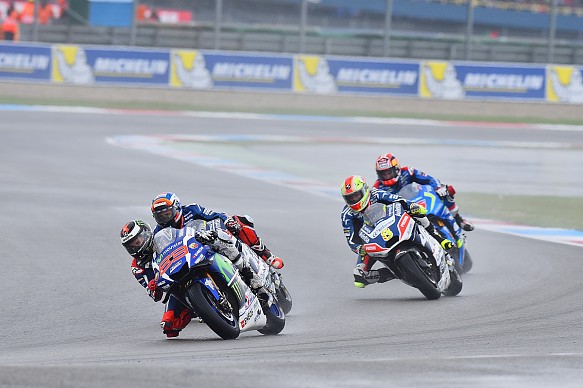 Jorge Lorenzo admitted he was probably riding “slower than ever” as he struggled in the wet Assen MotoGP race.

The Yamaha rider plunged down the order as the weather worsened, having only qualified 10th in mixed conditions. Having run as low as 19th before the mid-race stoppage, he eventually finished 10th, last of those who had not fallen earlier on.

“I gained because the others crashed, not because I was overtaking,” Lorenzo admitted. “I was probably slower than ever, especially when all the big water came, going slower and slower. I even thought to enter the pits because I was 19th and I wouldn’t get any points and I was taking risks.

“The second [part of the] race with the soft rear tre and less water on the track, I was better, but still one of the slowest riders. The only thing that I could do was try not to crash, try to finish the race in 10th place and get some points and that’s it.”

Lorenzo said discomfort with the Michelin front tire’s feeling in the wet was at the root of his poor performance.

He acknowledged that others had struggled in similar ways but felt it was particularly costly for his personal riding style.

“When you are slow and it is giving you warnings, if you push more you crash. When I feel that the front doesn’t have grip in the braking in the corner with my riding style and the position of my body on the bike, I just suffer more than the other riders.

“I’m not able to suddenly change my riding. When I have front feeling, like in Motegi for example in the rain, I’ve been able to be the fastest one but obviously when I don’t have front grip, I can be the last one.”