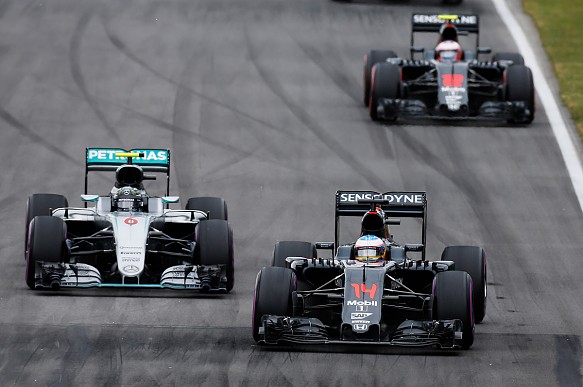 Fernando Alonso remains adamant McLaren-Honda is more likely than any other team to depose Mercedes from its dominant Formula 1 position.

Although McLaren has made progress in 2016, with its current tally of 24 points from the first eight grands prix just three shy of its total score last season, it could not break into the top 10 in the last two races in Canada and Azerbaijan.

Alonso and leading team personnel such as chairman Ron Dennis have long insisted that McLaren-Honda has the best long-term potential of any of the squads chasing Mercedes. While Honda’s current weakness had been underlined by McLaren’s struggle on Montreal and Baku’s long straights, Alonso said that was not denting his faith at all.

“There are weekends where we’re competitive and ones we struggle with the long straights that will be painful,” he said. “I think in general the team is doing OK.

Alonso’s teammate Jenson Button said there were still encouraging signs from Baku, where he only qualified 19th but made it through to 11th in the race.

“We took a lot of downforce off the car and the car still felt good in corners so that’s positive,” said Button. “You can see the progress race-by-race.

“We need to improve everywhere, but I think [Baku] is probably the worst track for us because of that really long straight. It was not a horrific result – no points, but lots of good info to take away.