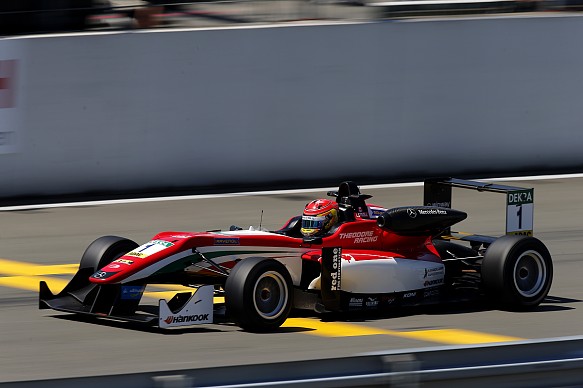 Prema Powerteam driver and points leader Lance Stroll charged to a clear fourth Formula 3 European Championship win of the 2016 season in race one at the Norisring.

The Williams F1 junior lined up on pole position but dropped behind Joel Eriksson in the early stages, as Callum Ilott – who qualified second but was hit with a 10-place penalty – charged from 12th to third.

The Van Amersfoort Racing driver attempted a move on Stroll for second but outbraked himself at Turn 2 midway through the race, crashing into leader Eriksson and opening the door for Stroll to reclaim the lead.

The safety car was deployed to clear the two damaged cars, with Stroll having to contend with another brief pause when Sergio Sette Camara and Guanya Zhou collided at Turn 4 while battling for third.

Stroll pulled away from Niko Kari at the restart and crossed the line one second clear of his nearest rival to claim his first victory at the Norisring, extending his lead in the championship.

George Russell struggled in the early stages but the Hitech GP driver recovered to fourth, while Ralf Aron and Ben Barnicoat moved up to fifth and sixth after late overtakes on Mikkel Jensen.

Will Buller, on his return to Formula 3 to replace Zhi Cong Li at Carlin, retired early in the race with a mechanical issue.

Ilott, Eriksson, Sette Camara and Zhou joined him on the sidelines, as did Harrison Newey – after contact with Piquet – and Maximilian Gunther, who tapped the Turn 7 wall.