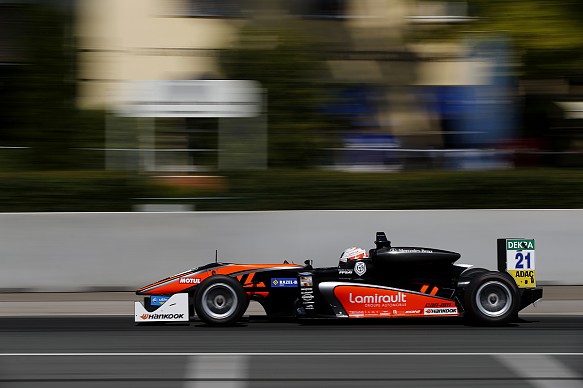 Van Amersfoort Racing driver Anthoine Hubert held off championship leader Lance Stroll in Race 2 at the Norisring to pick up his first win in the Formula 3 European Championship.

The French driver started on pole position and looked in control throughout the race, despite having to contend with three different safety car periods for incidents.

The first was for two separate collisions, after Alessio Lorandi and Ralf Aron collided at Turn 2 and Ben Barnicoat was tipped into the Turn 5 exit wall by Ryan Tveter.

The safety car returned to the track following contact between Motopark teammates and Red Bull junior drivers Sergio Sette Camara, who was forced to retire, and Niko Kari.

Hubert led away from the final restart, after Will Buller slammed into Harrison Newey and Pedro Piquet at Turn 2 in the closing stages to bring out the safety car for the final time and held off the challenges of Stroll to claim his first F3 victory.

He also becomes the eighth different winner in European F3 of the 2016 season.

Prema’s Stroll failed to back up his race one victory with success in the second event of the weekend, finishing half a second behind Hubert.

Maximilian Gunther completed the podium, ahead of Nick Cassidy, who charged all the way from 19th on the grid to fourth with some feisty overtaking.

Joel Eriksson had to settle for fifth, with Guanyu Zhou next up.

Callum Ilott started in 15th after his penalties for an engine change and his race one collision with Eriksson, but recovered to seventh.

Nikita Mazepin was 11th, with Kari slipping down to 12th in the final few laps.

David Beckmann rounded out the classified finishers after a late pitstop.