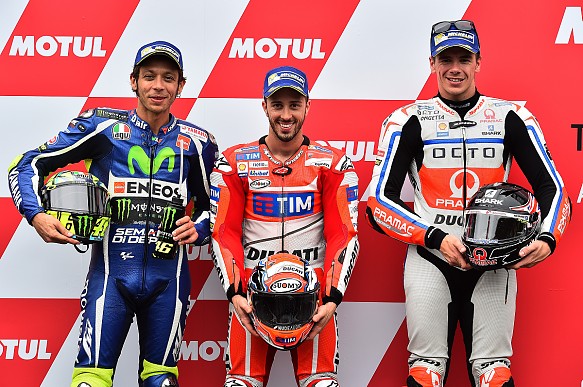 After Andrea Iannone topped both of Friday’s practice sessions, Dovizioso led the way in third practice on Saturday morning, then claimed the fourth pole position of his MotoGP career in a damp session on Saturday afternoon.

Rossi will start second but has also been strong in the dry, and done work on the harder compound tyres.

The Yamaha rider was second to Iannone on Friday afternoon by just 0.004 seconds and then fourth in third practice but just 0.100s off Dovizioso’s benchmark.

Ducati’s strong pace follows a tough weekend at Barcelona, where it was well adrift, and while more rain is forecast for Sunday’s 26-lap race at Assen, Dovizioso is wary of the threat of Rossi if that does not eventuate.

“We didn’t expect to have this speed,” he admitted.

“Still our pace is not like Valentino, I think he is the fastest in the dry for the race tomorrow, but we are very close.

“So this is good, especially after a bad weekend in Barcelona.

“I’m happy with how we worked, about our speed.

“It’s important to have the speed and to work on the small details for the race.”

Dovizioso and Rossi both pitted for a new rear tyre during qualifying as the track dried, and the Ducati man admitted that running behind his countryman was beneficial.

“Apart from the speed we have in the wet it was very important to understand the change of the track because it became dry very quickly, and our strategy was to make just one exit,” he said.

“But after two laps, I decided to change the strategy, also because I did already a good lap time, it was better to try to change the rear tyre and it worked.

“Apart from that, I was also lucky to exit behind Valentino, so it was quite easy to do the lap time because I had also the reference.”

Iannone came into the weekend knowing he will start last on Sunday, as a penalty for his clash with Jorge Lorenzo at Barcelona.

He was the only rider to try Michelin’s intermediate tyre during qualifying as the track dried, outpacing the wet-shod Danilo Petrucci, Lorenzo and Maverick Vinales on his final lap.

“I think it’s a little bit of an advantage because I now understand and I know what to expect [if conditions on Sunday are mixed],” he said.

“We have data, and I think it’s possible to improve the bike a little bit.”