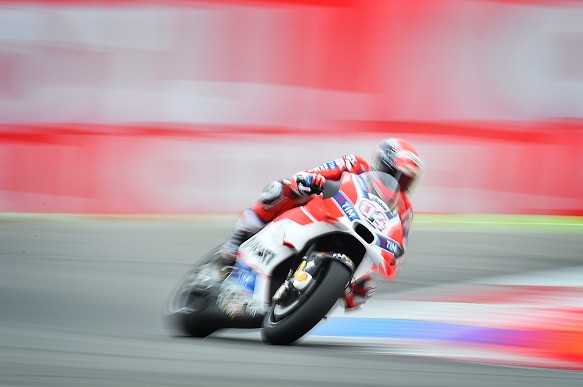 Drizzle hit Assen about 45 minutes before qualifying, just before the start of the final practice session, which was punctuated by a number of falls.

Rain eased during qualifying, and by Q2 some riders entertained the notion of trying intermediates, with only Andrea Iannone – who will start last anyway – doing so, but circulating several seconds off the pace.

In the greasy conditions, Maverick Vinales and Marc Marquez both crashed on their respective out-laps, Vinales at the Strubben hairpin, Marquez at the Stekkenwal turn at the back of the circuit.

Marquez then commandeered a photographer’s scooter to ride back to the Honda garage and jump on his second bike, in shades of his sprint during qualifying at Austin in 2015.

As the checkered flag flew at the end of Q2, Pol Espargaro, Yonny Hernandez and Danilo Petrucci occupied what would have been an unlikely front row.

However, as a dry line rapidly emerged, Valentino Rossi jumped from 11th to top spot with a 1m45.961s lap, before being pipped almost instantly by Dovizioso.

Rossi’s Yamaha teammate Jorge Lorenzo was never a factor and will start 10th, one spot ahead of Vinales.

Marquez got back up to fourth, while his Honda teammate Dani Pedrosa will start 16th, equaling his worst-ever MotoGP qualifying with the 2006 Turkish GP in his rookie season.

Pedrosa crashed during practice four and entered the first phase of qualifying on his second bike, on which he could only manage sixth out of the 11 riders.

Cal Crutchlow grabbed fifth for LCR Honda, ahead of Hernandez and Espargaro, who both progressed from the first phase of qualifying at the expense of Hector Barbera, who was fastest before crashing.

Aleix Espargaro wound up eighth, while Iannone set the ninth-fastest time on the intermediates but will drop to the rear of the field.