MOTOGP: Rossi parks new frame for rest of Assen round

MOTOGP: Rossi parks new frame for rest of Assen round 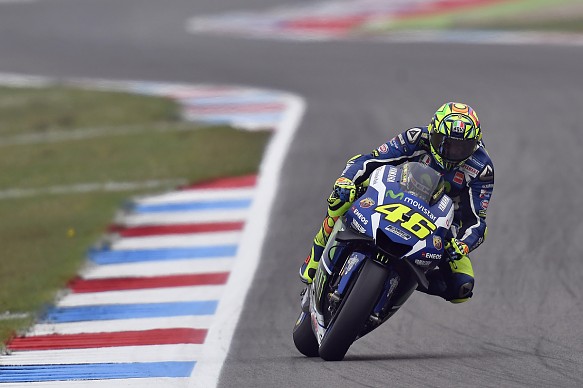 Valentino Rossi will contest the remainder of the Dutch TT with Yamaha’s regular MotoGP frame, while Jorge Lorenzo is also unconvinced by its latest update.

Both riders sampled a new Yamaha chassis during post-race testing at Barcelona earlier this month, and their early impressions were positive. Yamaha brought both the existing and new chassis to Assen, and Rossi and Lorenzo both sampled the update during Friday’s practice sessions.

Rossi, who was second in the afternoon and just 0.004 seconds off the pace set by Ducati’s Andrea Iannone, will park the new chassis for the rest of the weekend and stick with the specification he has taken to 2016 victories at Jerez and Barcelona.

“At Barcelona we tried different chassis but I wasn’t very sure about the improvement, so today we compared [the two], another time on another track,” he said. “At the end I prefer the standard chassis because I feel better with the front, I have a better feeling and from tomorrow I will use the standard one.

“It’s not a big difference. It’s just a small change but I prefer the normal one.

“We tried to work to improve the feeling with the Michelin [with the new chassis] with the front – we gained something we think, but we lost something in the stability.”

Lorenzo will give the new chassis at least one more chance at Assen, opting to keep one of each specification for Saturday’s running before making a decision.

“In Montmelo I felt quite a big difference,” he said. “Here I couldn’t find so much difference, also because when I tried the new chassis I had a different setting, so I couldn’t compare very clearly.

“Tomorrow we will keep one old chassis and one new chassis again to decide for Sunday, when we will have two of one. Here I don’t feel the difference – I want to do more laps to understand.”

Lorenzo wound up fifth on Friday afternoon, 0.4s off the ultimate pace, and admitted that while some of that comes from his Yamaha, he still has work to do in the final sector, especially the final chicane.

“I have to understand still the best lines, the best way to be a little bit faster,” he said. “Every year I try something different but it’s still not working.

“Let’s see if tomorrow it works a little bit better; maybe I will not recover all of these two or three tenths I lose in this sector, but if I can improve half it will be better.”