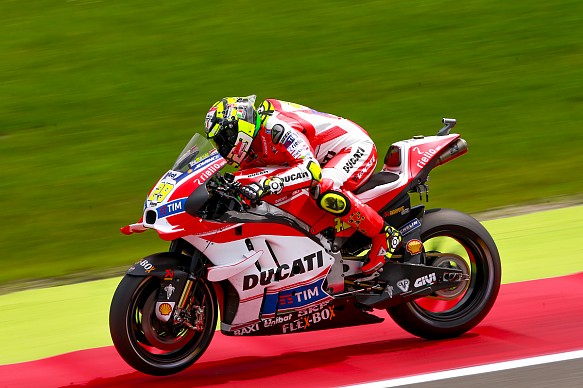 Dutch TT practice pacesetter Andrea Iannone believes Saturday will be the most important day of his Assen weekend, despite the fact he will start the race last.

The Ducati rider set the pace in both of Friday’s practice sessions, by 0.226 seconds over teammate Andrea Dovizioso in the morning running, then by 0.004s over Yamaha’s Valentino Rossi in the afternoon. He will start Sunday’s 26-lap race from the rear of the grid, though, as a penalty for colliding with Jorge Lorenzo at Barcelona three weekends ago.

Knowing his qualifying output will be redundant, Iannone will instead focus on improving the “good pace” of his Ducati for the race during Saturday’s two practice sessions and qualifying itself.

“Tomorrow is the most important day for us,” he said. “I want to improve the bike a little bit because the change of direction is very hard – especially when I use the front brake to reduce the speed while changing direction, the bike is very physical.

“At the moment the big problem, especially for the race, for 26 laps it’s very difficult to manage this situation. Tomorrow with my team we will try to improve this situation, we will try to balance the bike a little bit better for the change of direction and hopefully improve in this area. But we have the speed and this is very important.”

With rain forecast across the next two days, Iannone added he would only start to contemplate a race strategy after seeing who had qualified where, and that defining a good result was “difficult.”

“Only during the race can I possibly understand what is my target,” he said.

PENALTY CHALKED UP AS EXPERIENCE

Iannone says he will learn from the clash with Lorenzo and subsequent penalty he has received – his second of the season – reiterating that he was caught out by the Yamaha’s slow pace.

“I feel the penalty was correct,” said. “Now when I recover the gap to the other rider, I will think a little bit more.

“During the race in Barcelona, Lorenzo was very slow, but I didn’t expect that in this braking zone. I accept this penalty, it’s more experience for the future and for sure I try to improve all situations during the race.”