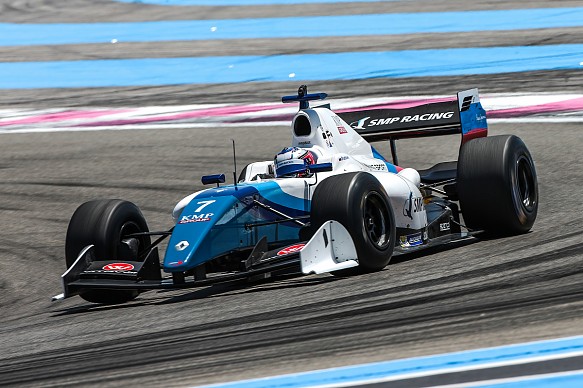 Spa victor Egor Orudzhev topped both Formula V8 3.5 practice sessions at Paul Ricard on Friday, as the series returned to the French venue after a season’s absence.

“That is the best Friday that we have had this year,” said Arden FV8 3.5 team manager Kenny Kirwan. “Egor was under pressure in Spa and he delivered the win after a bit of a torrid start to the year.

“For he and Aurelien to finish first and third and then first and fourth is a turnaround from some of our other Friday performances this season. We know there’s no points today, though, so let’s see what happens tomorrow.”

Panis, who lies third in the standings, 36 points adrift of compatriot Dillmann, has yet to decide on his downforce levels for Saturday qualifying.

“It is a little like Spa here, where you can make medium and low-downforce work, so we have yet to choose [which wing level to run],” said Panis. “It is also very hot in the car and the circuit is tough on your arms, but I am quite happy we have a competitive car for tomorrow.”

Charouz-run Lotus driver Roy Nissany claimed fourth in first practice before suffering an incident in the afternoon that left him in the penultimate position.

“Roy had a spin in FP2 and damaged the engine on the yellow parts on the track, so we had a leak,” said Lotus team manager Bob Vavrik. “These things happen. After Roy’s big crash at Spa last time out, some people thought our problems today were related. But in FP1 everything was fine, and the issue was unrelated.”

RP Motorsport’s Vitor Baptista finished fifth in the morning. The Brazilian has a new teammate at Ricard, as GP2 race winner Johnny Cecotto Jr. has made way for Polish GP3 driver Artur Janosz.

Deletraz’s Fortec teammate Pietro Fittipaldi jumped from 12th in the morning to fifth in the second session, as he acclimatised to the circuit.

“I have never been here before, and have only done 30 laps, so I am still learning the circuit,” said Fittipaldi. “The afternoon, when most people ran new tires, was good. There are lots of corners with no reference points, so I think it’s somewhere you grow in confidence with after laps.”