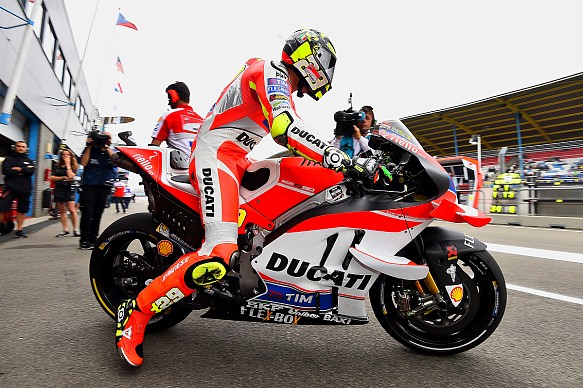 Iannone will start Sunday’s race from the rear of the grid due to his Barcelona penalty for collecting Jorge Lorenzo, but underlined his pace in the Netherlands after also topping the morning session.

Unlike the first session, Iannone only moved to the top of the times late, and his 1m33.951s was only 0.004 seconds clear at the top.

Iannone displaced Valentino Rossi, who jumped up from 11th to top spot momentarily on his Yamaha, while Honda’s Marc Marquez and Suzuki’s Maverick Vinales made it four different brands inside the top four.

Championship leader Marquez led the way for the bulk of the session, regrouping from setting only the 11th fastest time in first practice by finding more than one second during his first run. He improved again late to a 1m33.724s but wound up 0.133s behind Iannone, with Vinales 0.301s off the ultimate pace.

Lorenzo was fifth, ahead of factory and satellite Ducati riders Andrea Dovizioso and Danilo Petrucci, while Aleix and Pol Espargaro were eighth and ninth for Suzuki and Tech3 Yamaha, respectively.

With rain forecast for Saturday, Scott Redding secured what is provisionally the final place in the second phase of qualifying with 10th place.

Honda’s Dani Pedrosa was 11th, one spot ahead of Hector Barbera, who crashed at Osserbroeken, the third right-hander early in the lap, while 15th-placed Eugene Laverty came unstuck at the Strubben hairpin.

Alvaro Bautista crashed at both first-sector corners on his Aprilia, Osserbroeken early and Strubben late, winding up 20th.