NASCAR: Elliott and Larson continue run of momentum at Michigan

NASCAR: Elliott and Larson continue run of momentum at Michigan

Not even an experimental competition package was able to disrupt the momentum shared by Chase Elliott and Kyle Larson (above) on Sunday in the Sprint Cup race at Michigan International Speedway.

Although neither driver was able to pull off his first career victory, they placed second and third behind Joey Logano and very much looked like youngsters on the cusp of a major breakthrough. The runner-up was Elliott’s best result of the season and he’s only finished outside of the top-10 on four different occasions.

After a slow start, Larson has posted four straight top-13 finishes, including a second at Dover and a third on Sunday. The string of success has elevated him from 23rd to 19th in the standings during that stretch.

“It was a solid run for us,” Larson said. “We’ve been consistent as we’ve been in the last year and a half anyways, so it’s nice to be running up front and getting closer to a win I feel like.

“We still got some work to do, but it is nice when we can get a package like this thrown at us just a few weeks before the race, and our guys at the shop and here at the racetrack can look at engineering data and come up with a good piece.” 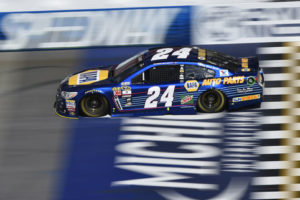 Meanwhile, in what’s become a characteristic response to coming up just short, Elliott shouldered the blame for not winning a race he led for 35 laps. He believes he didn’t get through the gears well enough on the final few restarts and that was the difference between he and Logano.

“Well, we had a shot,” Elliott said. “Kyle gave me a really, really good shove on a restart and we were able to get by him. I felt like we could kind of control the pace when we were out in front of him and I thought that said a lot about our car.

“I felt like we had a really good opportunity to control the rest of the race if we had good restarts and good time on pit road. Pit road was fantastic and the restarts weren’t, so that was the difference.”

Still, Elliott is sixth in the championship standings and has now led 86 laps over the past two events. He looks like someone on the verge of his initial breakthrough, even if he believes he’s the one preventing the team from sealing the deal.