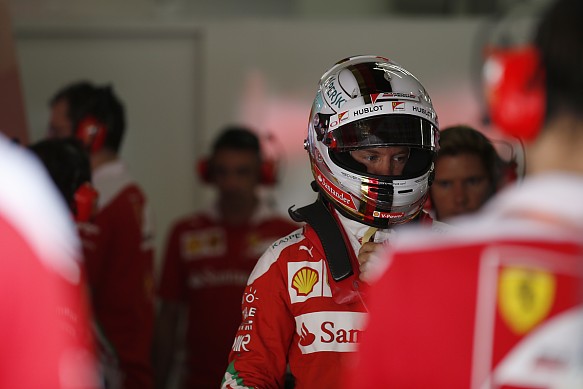 Heavy rain throughout the morning meant the first car did not venture out on to the sodden track until 15 minutes into the hour-long session, with Valtteri Bottas serving as the guinea pig on full-wet tyres as many others looked on.

Despite standing water in some places, and obvious plumes of spray, come the halfway point the rain eased sufficiently for Ferrari’s Kimi Raikkonen to finally record the first laptime with a 2m00.812s. At that stage, teammate Vettel had not even ventured out of the garage for an exploratory lap.

Vettel finally took to the track with 22 minutes remaining, and on intermediates, at a time when Red Bull duo Daniel Ricciardo and Daniil Kvyat were also testing the inters.

Both Red Bulls set purple sectors – Ricciardo in the first, Kvyat in the second – before they aborted their laps and returned to the pits, highlighting the track was ready for that particular Pirelli compound. At the same time, and on his first flying lap, Sainz temporarily went quickest on full wets, knocking Raikkonen off top spot by a second.

Behind him, however, and despite complaining at one stage of “issues”, including being “stuck in first gear,” Vettel comfortably went on to set the quickest time with a lap of 1m57.351s. Vettel remained top of the timesheet through to the conclusion, with Bottas his nearest challenger, but 0.710s adrift.

Force India’s Sergio Perez was third quickest, but 1.338s down, followed by Sainz, the Haas of Esteban Gutierrez, and Renault’s Jolyon Palmer. The Briton sustained a punctured right-rear full-wet tire at one point in the session, and ventured off track on a couple of other occasions, but managed to recover to finish sixth fastest.

Teammate Kevin Magnussen and Manor’s Pascal Wehrlein were the only other drivers to finish with a time inside two minutes.

Just 14 drivers actually set a time, with Wehrlein’s Manor teammate Rio Haryanto the last of those, but 5.3s off the pace.

Marcus Ericsson was in a similar position but not by choice, only making it out for a last-gasp installation lap following a technical problem on his Sauber.