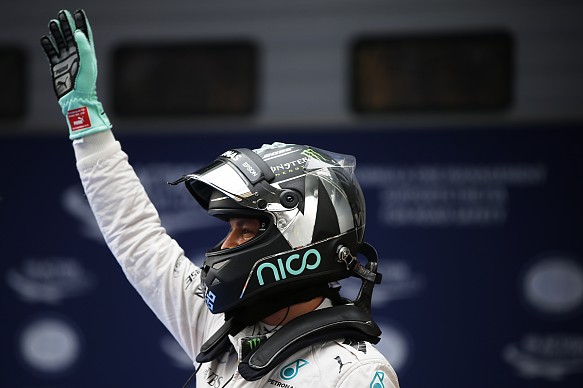 A grid penalty for reigning world champion Hamilton meant he was never going to start on pole, but his Mercedes failed to even figure in the fight thanks to an ERS problem that meant he failed to escape Q1.

Friday practice pacesetter Kimi Raikkonen was on provisional pole after the first runs in Q3, but he made a mistake at the penultimate corner and failed to improve. Teammate Sebastian Vettel only made one run in Q3, but that was only good enough for fourth spot.

Ricciardo therefore stole into second with a rapid final effort in his Red Bull, 0.055 seconds faster than Raikkonen’s Ferrari but over half a second down on Rosberg, who got through Q2 on soft tires and can consequently start the race on a different strategy to the other front-running cars.

The Williams of Valtteri Bottas was fifth fastest, fractionally slower than Vettel, while the second Red Bull of Daniil Kvyat rounded out the top six.

Sergio Perez was seventh fastest for Force India, ahead of the Toro Rossos of Carlos Sainz Jr. and Max Verstappen. The second Force India of Nico Hulkenberg rounded out the top 10, but was subsequently penalized for an unsafe release after his car shed its left front wheel in the final minutes of Q2. That prevented any drivers from completing second runs in this segment, and meant Felipe Massa’s Williams missed out on the top 10 by just 0.014s to Hulkenberg.

The two McLarens of Fernando Alonso and Jenson Button, Romain Grosjean’s Haas, and the Saubers of Marcus Ericsson and Felipe Nasr completed the top 16 in that order. All were denied new-tire second runs thanks to the Hulkenberg incident and therefore had to rely on the “banker” times they set on used rubber at the start of Q2.

Alonso groaned repeatedly with exasperation when told over McLaren’s radio that he would have to abort his second run, while teammate Button’s response was, “Are you kidding me?! One day we’ll show our true pace!”

Kevin Magnussen’s Renault and the second Haas-Ferrari of Esteban Gutierrez both fell at the first hurdle of qualifying, thanks to late improvements from the Saubers. Magnussen, who lost most of Friday’s dry running to a rear suspension problem, almost did enough with his final flying lap, but Nasr bumped him out by less than a hundredth of a second.

Gutierrez ended up 18th fastest, paying the price for Haas completing its second Q1 runs too early as the track improved. The second Renault of Jolyon Palmer was nearly eight tenths slower in 19th, but well ahead of Rio Haryanto’s Manor-Mercedes.

Hamilton’s ERS problems meant he failed to set a time in qualifying, but he will start last on account of a five-place grid penalty for an unscheduled gearbox change ahead of this weekend.

Bahrain qualifying star Pascal Wehrlein also failed to set a time, after the Mercedes junior driver lost control of his slick-shod car over a wet patch on the start/finish straight and glanced the barriers in the early stages of Q1. That accident caused a lengthy delay to the session as marshals attempted to dry out this part of the circuit with a track sweeper.