F1: Ricciardo believes he can fend off Ferraris

F1: Ricciardo believes he can fend off Ferraris 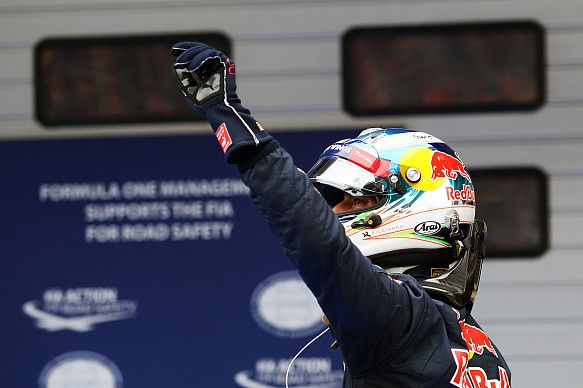 Although Ricciardo’s “awesome” second place on the Shanghai F1 grid owed a little to mistakes by Ferrari pair Kimi Raikkonen and Sebastian Vettel, he is confident Red Bull’s pace is no fluke.

“Today is encouraging. If we can have this on one lap then in the race we should still be pretty competitive,” said Ricciardo. “We’re normally better off in the race.

“Hopefully, we’ve a race with Ferrari. Nico [Rosberg] starting on the softs should be in good shape, so if we can battle for the podium that would be awesome.”

The result is Ricciardo’s first front row start since China two years ago.

“We’ve only had a couple of races, but up until now we’ve exceeded, maximized everything we’ve got, and we’ve shown true dry pace here,” he said. “To get a front row in dry conditions is awesome and testament to how far we’ve come since the end of 2015.

“We have to try to keep going, but it feels good to be back up here. I know it’s only qualifying, but the plan is to be back here after the race.”

Ricciardo admitted he had not expected to be so far up the grid earlier in qualifying.

“With the balance, it didn’t seem like we were going to be in the fight for the front few rows today,” he said. “But in Q3 I found a bit more speed, although the super-soft is a tricky tire to manage to get the one lap out of it. It gets chewed up quite a bit as the lap goes on.

“Understanding that session as it went on, and me understanding the track and the engineer making a few adjustments with pressures and the front wing, I think we got a good package at the end. So it was pretty awesome. We didn’t expect this.”