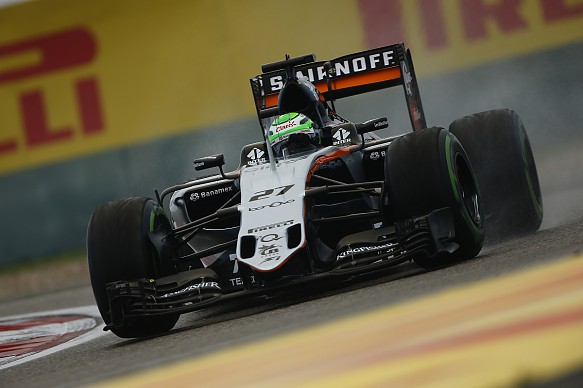 Nico Hulkenberg has been given a three-place grid penalty for the Chinese Grand Prix after shedding a front wheel from his Force India Formula 1 car.

Q2 at Shanghai had to be red-flagged and abandoned with just over a minute to go when Hulkenberg’s left-front wheel came off at Turn 10. The officials ruled Force India guilty of releasing its car in an “unsafe” condition and imposed the penalty.

Hulkenberg had set a lap good enough to reach Q3 before his incident, so was set for 10th on the grid prior to being demoted to 13th. The German suspects the wheel loss was a mechanical failure rather than a case of it not being fitted correctly in the pits.

“Usually there is a bit of vibration going on and you can tell something is not right but this one was very sudden and it came off,” he said. “One minute it was on and the next minute it was off.

“I was going really slow and it just popped off. There were no mistakes with the wheel being put on, I think it happened after that – once it was out there.”

Force India’s chief operating officer Otmar Szafnauer added: “It’s unusual to see a wheel come off and we need to investigate the issue further to understand exactly what happened.”

Hulkenberg’s penalty elevates Felipe Massa’s Williams and the McLarens of Fernando Alonso and Jenson Button to 10th through 12th places.

Force India still has a car in the top 10 on the grid, as Sergio Perez qualified seventh.