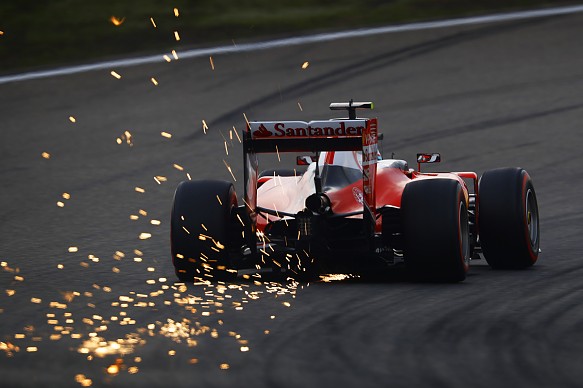 The two Ferraris lapped fastest in Q1 and Q2, and Raikkonen sat on provisional pole after the first runs in Q3 at Shanghai, but he ran wide at the penultimate corner on his final lap and ended up third.

Teammate Vettel made just one run in Q3, which was only quick enough for fourth on the grid, behind Raikkonen, Daniel Ricciardo’s Red Bull and Nico Rosberg’s Mercedes, which eventually took pole by more than half a second.

“I’m not entirely satisfied with where we qualified,” said Vettel. “I think the first was there, at least P2 was there for grabs, but the lap I had wasn’t good enough.

“I started off on the wrong foot, probably asked too much from the tires already on the first sector, and from then on I was playing catch-up.

“I was confident I could do the same job with just one set. Now I know I couldn’t, because the lap wasn’t as good as it should have been. It was not my best lap of the weekend.”

Teammate Raikkonen also felt he threw away a real shot at pole with a repeated error on his crucial qualifying lap, which ended up being only fractionally slower than his previous best.

“I’m quite disappointed with what happened in qualifying,” he admitted. “It was a good lap until Turn 14 at the end of the back straight.

“The previous run on the same corner I ran too deep, and the last one I was quite a bit up on that lap but ran wide at the hairpin. It’s a shame as I had a chance to be on the top.”

Vettel reckons Ferrari’s superior race pace should allow it to recover the ground lost to Ricciardo’s Red Bull in qualifying.

“Around here it’s very important to find the right balance as qualifying progresses and they did that,” Vettel added. “They had a very good day but I think for tomorrow we should be ahead of them again.

“The car feels good; the tire degradation could come our way. I think we have a good chance of finishing higher than fourth.”