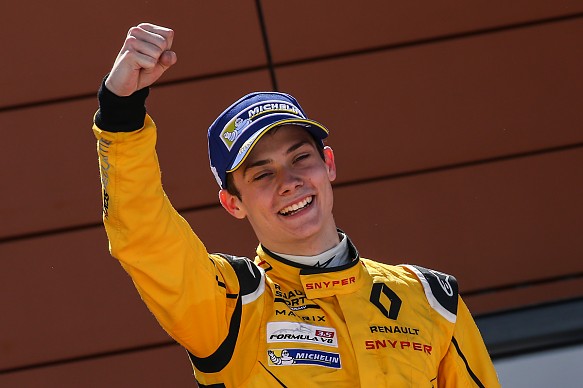 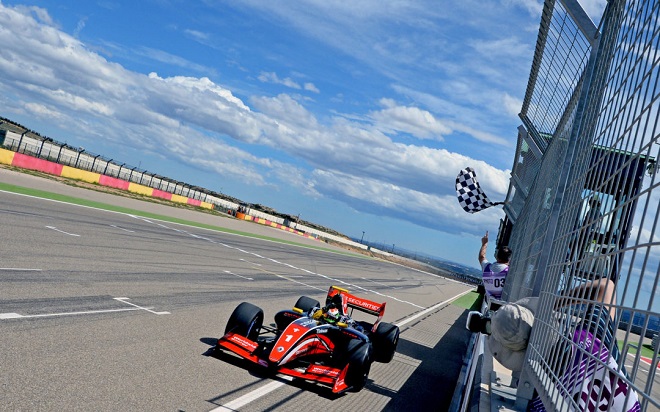 “I was very happy to qualify second, although Egor, Tom [Dillmann] and I were all close,” said Deletraz. “Then to be a rookie and start my season off today with 25 points makes me very happy.

“There is no reason why we can’t do well again in race two, we just need to keep working.”

Orudzhev’s initially innocuous looking lap one incident had severe repercussions; the front wing on his Arden car was destroyed on a steep inside curb as the Russian attempted to rejoin the circuit. The damaged machine was sent skating across the road into the outside gravel trap and as Orudzhev retired the confusion assisted Deletraz in building an early advantage.

Dillmann qualified and finished third, but the single-seater veteran was forced to work hard for the podium following a difficult getaway that left him seventh and seven seconds adrift of Deletraz at the completion of lap one.

“I wasn’t really comfortable with my clutch, and the car went into anti-stall twice when the lights went out,” explained AVF racer Dillmann. “That left me around P10 going into Turn 1, but the team and I are working well and our race pace was good.”

Dillmann made a series of well-judged overtaking maneeuvers that were crucial to his progress through the field, but the Frenchman also benefited from a mistake by team-mate Alfonso Celis Jr., who had disputed second place with Matthieu Vaxiviere for much of the race.

Force India Formula 1 test driver Celis made a superb start from eighth, but the Mexican was outbraked by Vaxiviere for second into the hairpin on the opening lap. Celis hung onto Vaxiviere’s SMP Racing machine’s gearbox until running wide at Turn 5, five laps from home.

The race was enlivened by the defensive driving of Deletraz’s Fortec teammate Pietro Fittipaldi, who struggled to the finish in 11th with a broken right front wing, the remnants of which flapped about unpredictably.

Fittipaldi sustained the damage when Teo Martin Motorsport recruit Beitske Visser cut across his bows on the pit straight on lap two.