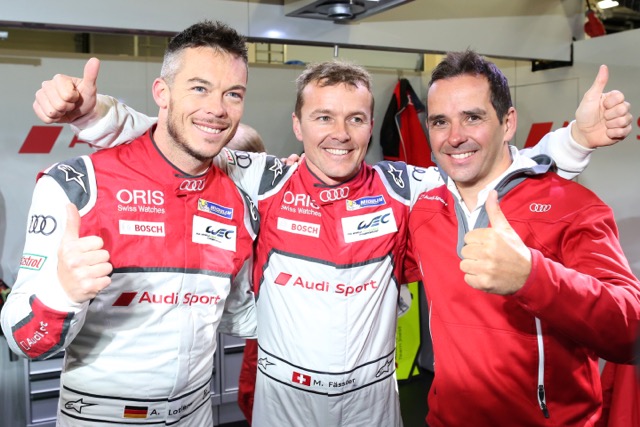 Audi dominated qualifying on a wet track for Sunday’s opening round of the World Endurance Championship at Silverstone.

Andre Lotterer and Marcel Fassler took pole position in the #7 Audi R18 e-tron quattro with an 1m53.204s average. That put them just a tenth up on the 1m53.308s average of the sister car qualified by Loic Duval and Lucas Di Grassi.

The two Porsche 919 Hybrids that had topped the times in free practice on Friday ended up nearly a second behind on the final aggregate times.

Di Grassi went quicker than Lotterer when he jumped aboard the #8 Audi, setting a 1m52.991s as a dry line began to emerge, but Fassler’s 1m53.207s kept #7 just ahead in the averages.

“We were not expecting this, but it is difficult to expect anything in these conditions,” Lotterer said. “Today was a better day for us and it is a nice reward for the mechanics.”

The pole position was the first for Audi in the WEC since the Fuji round in 2013 and brought to an end an unbroken run for Porsche that stretched back to the Japanese fixture in 2014.

The quickest Porsche lap from Brendon Hartley vaulted the #1 car he qualified along with Mark Webber ahead of the sister car of Neel Jani and Romain Dumas. Webber and Hartley’s 1m54.150s average was just over a tenth up on that of their team-mates.

The two Toyota TS050 Hybrids were off the pace in fifth and sixth positions after encountering technical problems.

“We had a significant hiccup in terms of the controls about which I can’t go into detail,” said Anthony Davidson, who ended up sixth with Kazuki Nakajima. “We’ve never really run in the wet before with this car, so this shows how pushed for time we have been and how complex the car is.”

Davide Rigon and Sam Bird took top spot in GTE Pro for the factory AF Corse Ferrari team. They ended up with a 2m12.440s average aboard their 488 GTE, which was nearly a second and a half up on the second-placed Dempsey-Proton Porsche 911 RSR of Richard Lietz and Michael Christensen.

James Calado set the fastest GTE lap of the session in the sister AF car, but team-mate Gianmaria Bruni was unable to set a lap after a dashboard alarm came on and he was forced to return to the pits.

Klaus Bachler and Khaled Al Qubaisi took pole for Proton in GTE Am.