How will the Verizon IndyCar Series’ most recent chapter in the open-wheel history books be written? Simple: 2015 was “The Year of the Aero Kit.”

As a season, it was as turbulent as the wake pouring off a car at the St. Petersburg season opener. And, thanks to an unprecedented number of flicks, winglets and shapely contours, and the compelling drama they delivered (good, bad and, yes, sometimes ugly…), aero kits dominated every aspect of how the year unfolded.

Long before the first green flag waved, Chevrolet and Honda were embroiled in a manic race to bring their brand-new aero kits up to some sort of speed in private testing. It was followed by a rush to meet January’s homologation deadline, then to manufacture and deliver the approved kits to their respective teams prior to Spring Training in early March – just two weeks before the season opener.

With aero kits handed off to IndyCar’s 10 full-season teams, a new wrinkle was brought to the modern era, when a brand-new piece of technology was simultaneously unveiled and barred from further development. Unlike the engines that Chevy and Honda spend countless hours tweaking from round to round, aero kit manufacturers were forced to stand on their pre-season labors, and the resulting designs, for the entire 2015 championship.

Powerless to make updates to the kits they’d paid for, teams went into ’15 praying they were with the right manufacturer. Bottom line, in a series where sponsor dollars aren’t easily found, those using the lesser of the two kits ended up spending hundreds of thousands of dollars “for the right to be less competitive,” as one team owner surmised.

Yet despite the wonky “buy it, but don’t touch it” mandate, the story of IndyCar’s inaugural aero wars centers on Chevy’s initial dominance and Honda’s fightback.

The aero kit concept was first floated in 2010 as the series unveiled its plan for a new chassis for 2012. After multiple false starts, IndyCar announced just prior to the 2014 Indianapolis 500 that aero kits would be raced in ’15. But understanding the repeated delays is vital to contextualize the end results of an inaugural aero kit-equipped championship won by Scott Dixon and his Chevy-powered and aerokitted Target Chip Ganassi Racing team.

Chevy closed the year at Sonoma with a perfect 16-and-0 in pole positions. The Bowtie not only won 10 of the 16 races; they also took eight of the first 10 victories and thoroughly dominated Honda at the Indianapolis 500. Chevy’s aero kit was, without question, the single biggest reason for the brand’s ownership of IndyCar. It also turns out that Chevy’s dedication to aero kits – even while IndyCar idled for years with indecision – set its success in motion long before 2015 arrived. 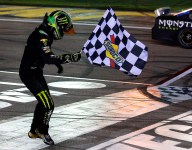 If Kurt Busch winning in Las Vegas didn’t completely bust a few playoff brackets, he certainly provided a nice shakeup. While it would (…)