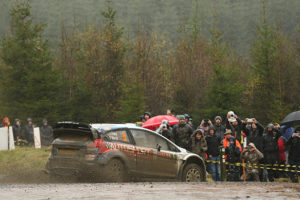 M-Sport drivers Elfyn Evans and Ott Tanak could both remain with the team for the 2016 World Rally Championship but alternating in a Ford Fiesta RS WRC.

Team principal Malcolm Wilson is currently assessing driver options for next season and admits there are names from outside the team under consideration for at least one of the cars.

He says there is no hurry to finalise the line-up as entries for next year’s Monte Carlo WRC season-opener do not close until December 18.

“Looking forward to next year, I have thought about them sharing a car and that’s one of the possibilities,” said Wilson.

“But at the same time how long do we carry this on for? Now I have to think about things.”

Tanak and Evans were instructed to drive flat-out from the start of last week’s Rally GB and Wilson was disappointed with the initial speed from the pair.

Evans ran fifth at first before falling to ninth with a puncture on the fourth stage, and could only recover to sixth, while Tanak progressed from an early ninth position to fourth before a final-morning crash.

“I told both of them, and I had been telling them from the end of Spain, there was nothing to lose – just get out there and show some speed,” Wilson said.

“It didn’t really matter if they crashed, I just wanted to see some great times.

“With that in mind, I thought there would have been a bit more.

“It got better, but then it was disappointing to see Ott end his rally early after he got slightly off line and hit a rock. There was very little damage to the car, but…

“We went to Wales with high hopes of fighting for the podium, but that didn’t happen.”

Asked if he thought he’d done enough in Wales to save his seat, Evans said: “It’s not up to me now. Take the puncture away and we were the best of the rest after Citroen and VW.

“Look at last year, they were finishing stages 15 seconds ahead of any other car and it’s quite clear Citroen has made a step.

“I think I had two strong days. I don’t think I’ve done a bad job. I’m a bit deflated to be sixth, but that’s where we are.”