That will put the No. 6 Stevenson Motorsports Chevrolet Camaro Z/28.R driven by Grand Sport (GS) points leaders Andrew Davis and Robin Liddell on the pole, while Chad McCumbee and Stevan McAleer will start on the Street Tuner (ST) pole in the No. 5 CJ Wilson Racing ModSpace Mazda MX-5.
Davis and Liddell enter the event with a 24-point lead in the GS standings over brothers Matt and Hugh Plumb (195-171), who will start second in the No. 13 Billfish Foundation/Rum Bum Studios Porsche 911.
“Obviously, Mother Nature was good to us today, but taking the pole under these circumstances is a nice reward for the exceptional season we’ve had to this point,” said Davis, who joined Liddell in scoring three victories and five podium finishes in six races. “It’s nice to be starting up front, because our Stevenson Motorsports Camaro is not as quick as our competition on the straights – and we’ve got plenty of them here at Road America.”
A pair of Mazdas will start on the front row in ST as a result of the cancellation. McCumbee and McAleer’s dominant victory in the most recent race at Lime Rock Park gave them a four-point lead over Liam Dwyer and Andrew Carbonell – drivers of the No. 26 SemperFiFund.org Mazda MX-5.
“Starting up front will give us a huge advantage, because Road America is a track that’s usually very difficult for us,” McCumbee said. “We’re excited, because our car is – by far – the best it’s ever been here. It’s driving great, with decent speed. We feel we’ll be more competitive here than we’ve been in years past, and I thought we’d have a potential top-five starting position if we held qualifying.”
Continental Tire Challenge driver Tim Probert was admitted to Froedtert Hospital in Milwaukee with fractured ribs on his left side following an incident in practice on Friday morning. He was awake and alert and will be kept overnight for precautionary observation.
Saturday’s two-hour, 30-minute Round 7 will take the green flag at 1:20 p.m. ET, and will be streamed live on IMSA.com and the IMSA mobile app. 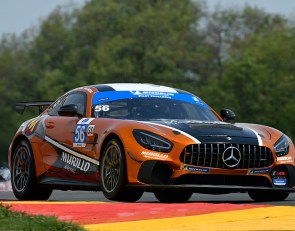 Mosing to miss VIR Pilot Challenge round after breaking foot