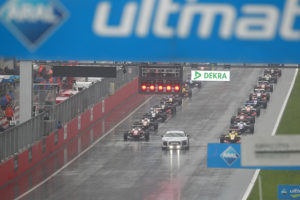 Prema Powerteam’s Felix Rosenqvist has backed the FIA stewards’ decision to abandon the final European Formula 3 Championship race of the weekend at the Red Bull Ring.

Heavy rain on Sunday morning delayed the start of the third and final F3 race of the weekend by two hours.

The race eventually got under way behind the safety car, but was red-flagged after three laps of running.

After a further 20-minute delay the race resumed, again behind the safety car, only for officials to throw a second red flag, this time halting the event indefinitely.

According to Rosenqvist, who started second behind title rival Antonio Giovinazzi, the stewards made the right call to call the race off as conditions deteriorated.

“The first couple of laps [behind the safety car] I was just waiting for the race to start,” said the Swede.

“I only had Antonio in front of me so my spray was not the same as those at the back.

“I was a bit surprised when they red-flagged it, because I was pushing for the race to start. [The team] were asking me on the radio all the time.

“There were some puddles out of Turn 3 but the rest seemed quite fine. Compared to Norisring it was definitely a lot better.

“From there on it just seemed to get worse, so I think we made the right decision in the end to stop the race.”

It was the third of this season’s 24 races that was halted early and given half-points, following the two early stoppages at the crash-marred Monza meeting.

The result leaves Giovinazzi 20.5 points clear of Rosenqvist with nine races to go.