MotoGP: Iannone's injury 'back to square one'

MotoGP: Iannone's injury 'back to square one' 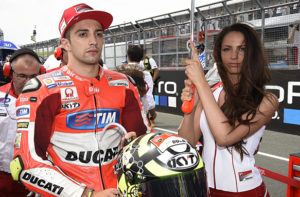 Ducati rider Andrea Iannone says he is “back to square one” with his shoulder injury but will try to reach the end of the MotoGP season before having surgery.

Iannone sustained a dislocated shoulder and an arm fracture when he fell during a test at Mugello in May.

He continued without missing any races – and took pole and second place at the Italian Grand Prix two weeks after his incident – but he says the situation is little better three months on.

“You don’t know how much I regret that last damned run at Mugello,” Iannone told Gazzetta dello Sport.

“It has changed many things. Unfortunately the situation isn’t improving.

“I’ve just returned from rehabilitation, one hour every day.

“I’ve tried to ride the bike the least I could, but I did on Saturday and we’re back to square one. Pain. Always.

“I’m worried, I can’t be as serene as I should, because I don’t know what to expect.”

Asked if he will need surgery, Iannone replied: “That’s what the doctors say.

“We need to reach the end of the season and manage this issue. Then we’ll see.”

In his first year as part of the factory Ducati team, Iannone is currently third in the championship, four points ahead of Marc Marquez and 31 clear of team-mate Andrea Dovizioso.

He has finished in the top six in every race, and that his improved consistent was down to the Ducati being more consistent to ride rather than him changing his style to reduce mistakes.

“That’s what is being written, but I’m still a rider that always goes for it,” Iannone said.

“If I don’t make mistakes anymore it’s because today’s bike is more forgiving.”