Ryan Hunter-Reay kept Andretti Autosport’s astonishing streak of Iowa wins alive with a superb victory at the 0.875-mile oval, the No.28 Andretti-Honda holding off CFH Racing-Chevrolet’s Josef Newgarden by half a second to the checkered flag.

It was Hunter-Reay’s first win in a year, his third at Iowa Speedway since 2012, and Andretti’s sixth consecutive at this track. The 2012 champion also led an American 1-2-3-4 in the heartland, as Sage Karam drove an aggressive, on-the-edge-race to claim his best finish for Chip Ganassi Racing-Chevy with third, and Graham Rahal took fourth for Rahal Letterman Lanigan Racing-Honda, despite a cut tire throwing off RLLR’s pit sequence, and another long pit stop due to a gearbox problem that sent him a lap down.

Said Hunter-Reay: “It felt like we had something (tonight). It certainly was going to be tough to beat them today, but this No. 28 DHL Honda was on rails at the end and I was driving the snot out of it. It was loose and I just kept my foot to the floor. I was barely having to lift at the end. It was a lot of work in the cockpit. This one we really had to work for, this was a hard one. After such a tough season, it was great to be back in Victory Lane.”

The effect of Rahal’s problems became clear afterward when he explained: “We had a heck of a night – the right rear went flat and then the car decided to just not shift. So we went from about lap 60 with it stuck in sixth gear. Unfortunately we went down a couple laps there and got lucky with that yellow at the end, but really just soldiered through this thing.

“It’s a shame because this Steak ‘n Shake Mi-Jack car was capable of winning tonight. We passed (Ryan) Hunter-Reay on the long run and I thought we’d be able to be right there, but she was jammed in sixth and we couldn’t seem to get it out. I tried to power-cycle the car on the back straight but just couldn’t get it to do anything.”

Rahal’s dogged persistence was worthwhile as he’s now moved to second in the championship standings after a disastrous night for most of his title rivals. Juan Montoya posted the first retirement as he crashed his Team Penske entry into the Turn 2 wall on Lap 10 with a suspected suspension failure, and Scott Dixon had what he described as “a weird problem with the right rear axle” that necessitated a long behind-the-wall stop that left him 37 laps down, in 18th place. Meanwhile Will Power and Helio Castroneves came home 10th and 11th for Team Penske-Chevy.

In the early stages of the race, it appeared only polesitter Castroneves and Newgarden had the pace to battle with the Ganassi duo of Tony Kanaan and Dixon, and they did so vigorously. It took until lap 60 of the 300 lap race for Kanaan to build a one-second advantage over his pursuers. Behind these dominant four, however, the Andretti quartet of Hunter-Reay, Marco Andretti, Carlos Munoz and Justin Wilson were climbing into the top 10, gradually knocking Power down the order.

Following the first round of pit stops and after the out-of-sequence cars – led by back-row starter Sebastien Bourdais of KV Racing – had pitted, Castroneves and Newgarden led Kanaan and Dixon, with Karam fifth ahead of the Andretti cars, Rahal and Power. Newgarden surged into the lead soon after one-third distance and held that spot for 20 laps until Castroneves repassed for P1, only for Newgarden to retake it on lap 159. Meanwhile as Kanaan and Dixon started to feel extreme pressure from behind as Hunter-Reay, Munoz and Rahal made their presence felt.

When a charging Charlie Kimball crashed out of 10th on lap 171, everyone got a chance to pit, which is when Rahal’s horribly long stop occurred as the car just seemed unable to accelerate out of its pitbox. Dixon also suffered a tardy stop, and when Kanaan’s car died soon after the restart and Castroneves fell down the field – from which he’d never truly recover – Hunter-Reay saw racing’s equivalent of the parting of the Red Sea. Up ahead, only Newgarden lay between him and a long-awaited victory. 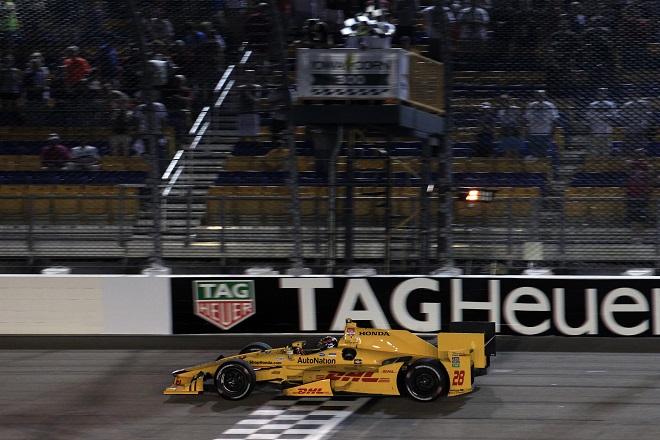 Hunter-Reay’s final stop, on lap 240, came some nine laps before Newgarden’s and those fast extra laps on fresh rubber proved crucial to jumping Ryan ahead of Josef. Despite a sixth caution period as Takuma Sato hit the Turn 2 wall, RHR was able to hang on to the lead quite comfortably.

Commented Newgarden: “It was tough. I really feared that if we were going to get into a shootout situation and we were behind, not leading, that it was going to be tough for us. We didn’t quite have the ultimate speed. Some of that’s down to downforce choices tonight. But we had a great racecar, I’m so proud of my guys. You can’t beat running around Iowa in an Indy car, it’s unbelievably fun.”

Ed Carpenter may not have had the out-and-out pace of teammate Newgarden tonight – certainly not over a whole stint – but his stealthy rise through the field was no less impressive than that of the Andretti cars. However, Ed’s ambitions were stymied in the final stint by some particularly muscular moves from Karam that forced the CFH Racing owner to back off the gas enough to allow Rahal and Munoz to drive home fourth and fifth, respectively. Carpenter was furious with Karam’s track ethics, and berated the youngster on pit lane afterward before heading to the stewards’ office. 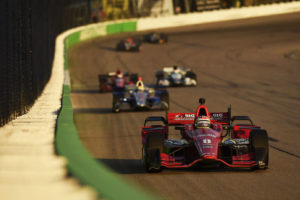 “I [told Karam] he has no respect for anyone out there,” fumed Carpenter. “If it wasn’t for guys with experience driving with their heads on he would be hurting himself and other people. I think it’s ridiculous. It’s cool that Ryan won the race, he needed that, and  Americans kicked butt tonight. I’m just mad because I had a car that was good enough for third or fourth and I do safe driving – slam on the brakes on the straightaway to save Sage’s butt – and he gets rewarded with a podium for it. He should have been penalized on the spot. He has no clue.”

Twenty-year-old Karam appeared unmoved. He said: “He’s just angry at my driving. He says I squeezed him a few times, but it’s the same way he drove me. It’s hard racing, I’m going for wins and that’s how we’re driving. It’s close racing, it’s IndyCar racing. This ain’t go-karts or anything anymore. We’re going to race each other hard and we’re professionals and we know each other’s limits. Tough luck for him, I don’t know.”

On achieving easily his best finish in his rookie campaign, Karam went on: “That was probably the most physical race I’ve ever done. It’s more physical than any road course race I’ve done so far. You get four, four-and-a-half Gs here per corner, especially when it was gripping up at the end there and the steering was heavier. My arms are ready to fall off, that’s for sure.”

Marco Andretti was unhappy with the handling of his car and was disappointed to finish seventh on a night when in the first half of stints, he looked as strong as the race winner. Ryan Briscoe at last scored a solid top-10 finish after a season in which he’s shone almost every time out for Schmidt Peterson Motorsport. Bourdais, meanwhile, did well to recover from the back of the field but spent most of the second half of the race locked in battle with Power who beat teammate Castroneves after Helio struggled with understeer as the track cooled.

Meanwhile, their championship-leading teammate Montoya left the track with a cast oh his thumb, wrist and forearm. Asked if there was any injury, he said, “Nah, nothing broken; just a bruise.”