Mark Miles doesn’t want to race into the fall next year but the Verizon IndyCar Series boss promised during Wednesday’s national teleconference there would be no more five-month IndyCar seasons. The CEO of Hulman & Company wants to start earlier and still stop before pro football gets percolating, but he understands September and October may have to be in play during 2016.

In his teleconference Wednesday, Mark Miles never said Verizon IndyCar Series’ 2016 season was going to be extended into September or October and, if he had his druthers, the season would start in February and end on Labor Day. However, the CEO of Hulman & Company did promise that next season wouldn’t be a five-month fiasco like this year.

“We do not expect to have a five-month schedule, nor was that ever the goal,” said Miles, whose decision to end the season by Labor Day to avoid going up against football, 2014-2015, has not been popular with a lot of fans, teams, sponsors and drivers. “The idea was not shorter and less,” he continued, “it was to see if we couldn’t slide the schedule while actually growing it earlier in the year to be in a more ideal or beneficial television period.

“The model we have been pursuing has been seven months and 16, 18, 20 events. And I think I can invite any number of TV executives to a call like this and without exception we would hear them say that from a television perspective, the post-Labor Day period for us will be a challenge.

“Clearly, though, and I think we have been saying this for some time, when we end the season next year will be directly related to when we can start it.  We are not going to have a five-month season next year.”

Miles made it clear his preference is to start much sooner than late March, hopefully early February, but wasn’t ruling out going into September or October.

“We have not yet decided when the season is going to end,” he continued. “It may well go later than Labor Day. That’s not our goal because we know among all these variables, additional races after Labor Day will not help our average viewership and average ratings. But there are other considerations.

“We’ve got to have great events and they can’t all be scheduled whenever we might want to schedule them. So we’re not going to know how long the season will go until we have worked through the rest of that, knowing what our options are. We hope to have the schedule out before the season ends.” 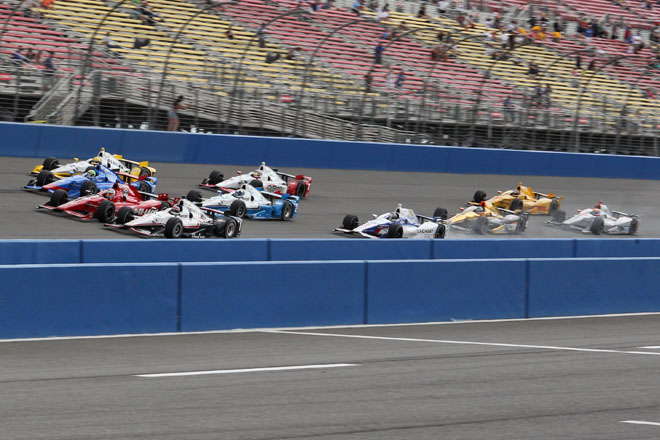 On the heels of a riveting MAVTV 500 at Auto Club Speedway in Fontana, Calif., that drew rave reviews but only a few thousand fans, Miles talked about returning to Fontana and Milwaukee, adding Elkhart Lake, exploring Phoenix and still pursuing international events.

The last race was first on the agenda. Auto Club Speedway president Dave Allen told RACER the only way IndyCar would be back to the 2-mile oval in 2016 would be if it was held in September or October and served as the season finale. The last two times IndyCar raced at Fontana in the fall it drew an estimated 30,000 people.

Asked if he wanted Fontana to remain on the schedule, Miles replied: “Yeah, I think we do want to have it back. It’s a traditional race that’s produced great racing. We want to see the crowd grow, we want to see it impact in the LA market and we know if that’s going to happen, there are things they will have to do and we’re going to have to find a date that will work. Obviously it can’t be in the summer.”

Road America president George Bruggenthies told RACER he had a date for IndyCar next year and he was just waiting for IndyCar to “make up its mind.” Asked about returning to Elkhart Lake, Miles responded: “It’s something we are looking hard at in our level of detailed discussions. From a Road America point of view, they don’t have a lot of flexibility on date. I think it’s pretty clear they would like, if we can do it, to combine with their World Challenge event, so they’re sort of a target on the board, and the question is, can we hit it? But it’s a focal point of our discussions, and we’re hopeful we can figure that out for next year.”

Michael Andretti has promoted Milwaukee the past four years with disappointing turnouts and has said the July 12th race could be his last if attendance doesn’t show improvement. But Miles claims it’s not a lame duck yet.

“We’re not drawing that line in the sand,” he said. “I spoke to one of the senior officers of the company that promotes it today and we’re both going to do what we can to see if we can continue to have Milwaukee on the schedule. Again, I think that’s going to take some sponsorship and we’re going to have to work on the date.”

Miles admitted that he hasn’t talked yet to Phoenix International Raceway boss Bryan Sperber and knows it’s a long shot because his only play would be early February and that’s likely too close to the NASCAR Sprint Cup date in March.

“We would have been there before now if there were a bunch of options to choose from. I don’t think there are. By being willing to start earlier in the year, we talked about right after the Super Bowl, it does open up that option at least from our perspective, but it’s not like there are two months between that and their first Cup race, so I think the judgments have to be made primarily by them about what kind of space they feel like they need between an IndyCar race and a Cup race to make them both successful.’’

With Fontana, Milwaukee and possibly Pocono on shaky ground for the future, Miles was asked if IndyCar might become co-promoters to keep the oval tracks alive?

“Keeping the ovals on the schedule is really important to us,” he replied. “There are various ways we can consider helping. To some extent we have shown a lot of what I will call “flexibility” in sanction fee pricing in part because of that objective. Whether we can bring some sponsorship… you know, there are a lot of points on the spectrum.

“I don’t believe that actually co-promoting when we are in their market selling tickets for them is our strength, so that seems like a bridge too far, but we care a lot about the ovals being part of the Series, along with the streets and the roads, and we’re going to do whatever we can to keep that balance.”