Ryan Briscoe credits chassis maker Dallara and his HANS device for surviving a scary crash at Auto Club Speedway that sent the Aussie cartwheeling backward through the infield on the final lap.

“I was talking with [IndyCar doctor] Terry Trammel and he says there was about 50 Gs of force from the frontal impact when the nose went into the ground, and I think the HANS device played the biggest role there in helping my spine and neck,” Briscoe told RACER. “That big of a frontal crash is what the HANS is designed to protect, and it did its job, and the chassis – the whole nose of the car – was filled with dirt and mud.

“It’s surprising when you see that because the front of the car took the most damage, but my feet and legs have no scratches or bruises. That’s amazing. IndyCar, in recent years, has made big strides in safety with padding and everything inside the cockpit. I know it helped me on Saturday to walk away from a pretty serious incident.” 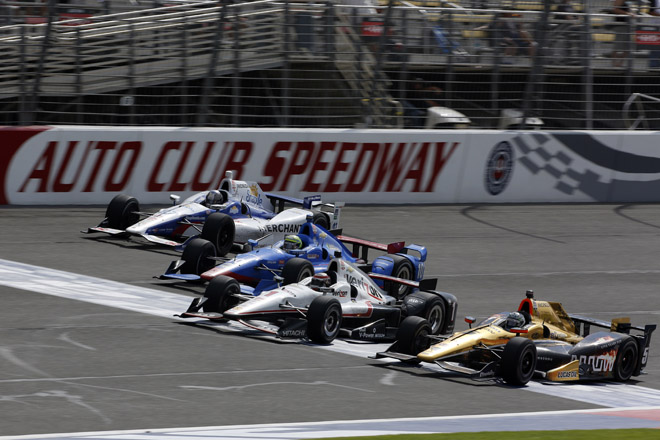 Briscoe was a serious contender throughout the MAVTV 500, and appeared to have anything from a top-5 to a win awaiting the No. 5 ARROW Electronics Honda, but after being hit by fellow Honda runner Ryan Hunter-Reay, Briscoe found himself spinning backward at over 200mph and taking flight.

With the nose of his car digging into the infield grass, the crash-worthiness of the Dallara DW12 chassis was put to the test once again as Briscoe became a passenger during the rotations and landings. Despite the sheer violence of the crash, the 33-year-old reports just one lingering effect.

“I really don’t have any issues at all; my neck’s a little stiff, and have a couple of bumps here and there, but after a crash of that magnitude, I have no problems at all,” he said.

After a rash of rearward flights in May at Indianapolis, measures were taken by the series to reduce the likelihood of what eventually happened to Briscoe. IndyCar capped the rear wheel guards, which some believed were a significant contributor to the flights experienced by Helio Castroneves, Josef Newgarden, and Ed Carpenter, but it’s clear the series will need to continue its efforts to keep spinning cars grounded on high-speed ovals.

“It all happens in such slow motion; I started to spin and the first thought I had was, ‘Oh God, I hope I don’t get airborne,'” said Briscoe, who was badly injured after a terrifying trip into the fences at the Chicago IndyCar event in 2005. “Then it takes off, you’re upside down, and just hoping you turn out OK. There’s really nothing else you can do when you’re upside down. It bounced around, I knew I’d rolled over, then it stopped and I did a physical check – wiggled my toes, and then I gave the safety guys a thumbs-up and that was it. I was pretty happy at that point…”

Briscoe’s Schmidt Peterson Motorsports team has plenty of work to do on the No. 5 Honda between now and the next race at the Milwaukee Mile on July 12, and with the chance to complete the rest of the season for SPM, the eight-time IndyCar race winner hopes to add number nine to his tally.

“I’m stoked to be in the car for the rest of the year; that was the deal all along, except for the two conflicts I had from Le Mans, but we’ve been really competitive; the car’s so good and the crew and the engineers have been doing such an amazing job, that it makes my job really easy,” he explained. “Of course, I’m in the car until Hinch (James Hinchcliffe) is ready to come back, and it’s been awesome to represent him and the team while he’s recovering.

“I think we had a really good chance at the win at Fontana, and I don’t think it will be the last time we’re in a position to win for Sam and Hinch and ARROW and everybody associated with the team. Last year was tough for me at Ganassi, but this is working out quite well and I hope I can continue in IndyCar in the future.”

Road to Indy 42m ago 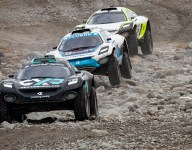 Halfway through its inaugural season, the Extreme E has revealed the first look at how the second season of the all-electric off-road (…)