If Kyle LeDuc can be stopped in Lucas Oil Off Road Racing Series Pro 4, nobody has figured out how to do it. On a warm, breezy weekend at Miller Motorsports Park in Tooele, Utah, LeDuc rolled to another pair of victories, his only loss so far this season coming in Round 1 at Lake Elsinore when Carl Renezeder took the win.

LeDuc was fast qualifier for Saturday’s Round 7, drew a zero-position inversion and then romped away to the win in his No. 99 Monster Energy/Toyo Tires Ford (BELOW). The Cherry Valley, Calif., driver did the exact same thing on Sunday, leaving the rest of the field to fight for second and beyond. Bryce Menzies and Brian Deegan filled out the podium on Saturday, while on Sunday it was Rob MacCachren and Renezeder.

If Pro 4 was a bit predictable, Pro Buggy was anything but, and at the end of the weekend, two first-time winners had stood on top of the box. Darren “Hot Sauce” Hardesty Jr. was second behind points leader Garret George at the end of the first lap on Saturday, but George ran into a mechanical problem that sent Hardesty (TOP) into the lead. In the No. 99 Competitive Metals/Off Road Warehouse Alumi Craft, the 14-year-old rookie survived attacks by defending champ Chad George to come home first, followed by Kevin McCullough and Mike Valentine.
On Sunday it was Valentine’s turn to shine. He has been knocking on the door all season, with three podium finishes coming into Utah. He jumped into the lead at the start in his No. 78 Mickey Thompson/Wiks Racing Engines Alumi Craft and was never headed. Chad George once again challenged for the lead, but a flat ended any hopes. Hardesty was second, followed by Garrett George.

After taking the Pro Lite lead on the opening lap in Round 7, it looked like Brandon Arthur might cruise to his second series victory, while Ryan Beat and Jerett Brooks battled for second behind him. They ran that way for 10 laps, until Brooks finally made a pass stick right before a full-course caution came out. On the next restart, he shot by Arthur to take the lead, and even another caution couldn’t keep him and his No. 77 General Tire/Synergy Electric Nissan from claiming his second win of 2015, followed by Arthur and Beat. The victory allowed Brooks to take the points lead despite a top-five finish by Brad DeBerti, who has held the championship lead since Round 1.
Arthur challenged for the lead again on Sunday, but held it only briefly as RJ Anderson quickly took back the position he had held since the start in his No. 37 LoanMart/BFGoodrich Tires Nissan. Anderson took his second win of 2015, followed by Arthur and Brooks.

Although not to the same level as LeDuc in Pro 4, Bryce Menzies has been dominating Pro 2 so far this season, with three wins and two seconds out of six races prior to Miller. He would have a fight if he was going to win in Round 7, as he was starting well back thanks to the inversion. RJ Anderson and MacCachren grabbed the first two positions at the start, with Menzies back in fifth. MacCahren and Jeremy McGrath got together fighting over second, with both suffering difficulties as a result. Menzies was soon up to second behind Anderson, who has run strong in 2015 but so far has not been able to put a Pro 2 win in the books. Once again, Anderson had the speed but not the endurance, and over-rotated at Turn 2 to hand the lead to the No. 7 Red Bull/GoPro Ford of Menzies. Menzies survived the carnage of the closing laps to take the victory, followed by Renezeder and, in his best Pro 2 finish, Sheldon Creed.

Sunday’s Round 8 contest was a much calmer affair – at least at the front – that resulted in a very popular victory. In his second year of operating his own team, Jeremy McGrath has been coming on strong, with four third-place finishes. On the second day at Miller, he jumped into the lead and stayed there, leaving the rest of the field to fight for the scraps. Renezeder and MacCachren were the main protagonists in the fight for second, and MacCachren eventually took the position, leaving Renezeder with third.

The Lucas Oil Off Road Racing Series returns to Southern California for Rounds 9 and 10 under the lights at the fames Glen Helen Motorsports Park on July 18-19. 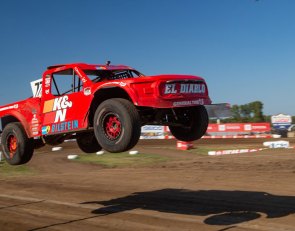 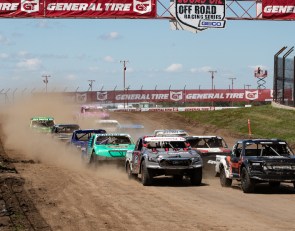