Best of the Best

Best of the Best

In the end, Lewis Hamilton was a deserving 2014 Formula 1 World Champion. But his Mercedes teammate, Nico Rosberg, pushed him to the end in a rollercoaster duel for supremacy.

Few would dispute that the right man won. But the way Lewis Hamilton prevailed in his Formula 1 World Drivers’ Championship battle with Mercedes teammate Nico Rosberg was unexpected. A close, season-long duel was always on the cards, but the surprise was that Rosberg proved to be the Saturday star, out-qualifying the fastest driver in F1 12 to seven, while Hamilton was usually the go-to guy on Sundays – a 180-degree reversal of expectations.

The initiative ebbed and flowed, but eventually it was Hamilton who seized control by outscoring Rosberg in six of the final seven grands prix. This was Hamilton’s great success in 2014: focusing his speed where it really counted. His wheel-to-wheel skills are beyond dispute, but the fact that he so often was willing to take the tougher route to victory proves he now really buys into the fact that speed alone isn’t enough.

“This year has shown that race day is the most important,” says Hamilton. “OK, it makes a race twice as hard when you’re not ahead of your teammate who has the same car, but the challenge is something you can enjoy and, yes, I’ve been trying to focus on my strength in races.”

The stats come down overwhelmingly in Hamilton’s favor. Only twice did one Mercedes driver pass the other on track in a genuinely successful overtaking maneuver. On both occasions it was Hamilton doing the passing. Of the 14 races in which both drivers finished, Hamilton was ahead 10 times. Only in Monaco, Austria, Germany and Brazil did Rosberg prevail. Yes, the eventual 67-point advantage enjoyed by Hamilton was distorted by the double-points Abu Dhabi finale, where Rosberg was hit by an ERS failure and didn’t score, but they finished in the right order.

Early on, despite non-finishing in the Australian season-opener, thanks to the failure of a rubber insulator on a spark plug, it seemed that Hamilton was going to dominate. In Malaysia, Bahrain, China and Spain, the British driver led a Mercedes one-two to claim the championship lead. And while Bahrain and Spain were close-run things – fact is, Rosberg had the pace advantage in the former and should have converted that into a win – Malaysia and China were Hamilton walkovers.

After his crushing win in Malaysia, Hamilton was beaten to pole by Rosberg in Bahrain. It made no odds in terms of results, as Hamilton took the lead at the start, but what was interesting was his puzzling annoyance at his German teammate having the temerity to learn from his data.

“Someone in the team did a huge study on my pace last week [in Malaysia] and, when I arrived here this weekend, there was this big document with all the reasons why I was quick,” huffed Hamilton. “He used that to his advantage. So I’ll do the same and hope that works for me.”

Maybe that was the instant when Hamilton really bought into the need to augment his vast driving ability with a more studious approach? If so, perhaps it was a seminal moment in his career. It would be wrong to say that Hamilton had not evolved his approach in previous years, for he had improved on tire management as the Pirelli era progressed, and throughout the whole 2014 season he used marginally less fuel than Rosberg. Instead, it was more about accepting that speed on its own isn’t enough; that you have to out-drive and out-think your rival.

But it’s hard to say what impact that realization had because it wasn’t long before what happened in Monaco derailed Hamilton and handed the mid-season initiative to the other side of the garage. Rosberg had to turn the tide after four consecutive defeats, and the streets he had grown up on provided the perfect opportunity. After all, in 2013 he had beaten Hamilton to pole here and gone on to win. He needed to repeat the feat.

As usual, both drivers had two shots in the final 12-minute qualifying shootout and Rosberg had an edge after their first attempt. A scruffy run through the first few turns meant he was unlikely to improve in his second so, controversially, he went up the escape road at the Mirabeau left-hander before the hairpin. The yellow flags meant Hamilton, behind him, couldn’t improve.

Honest mistake or foul? The stewards certainly couldn’t prove the latter, and perhaps only Rosberg himself really knows. It certainly seemed convenient. Either way, Hamilton was furious. And he seemed to carry that fury with him for a time.

Mistakes on Saturday in Canada, Austria and Britain, followed by brake failure in qualifying in Germany and an engine fire at the same point in the weekend in Hungary seemed to hand momentum to Rosberg.

Although Rosberg retired from the lead at Silverstone with a gearbox glitch and the safety car cost him a win in Hungary, heading into the August break it seemed he had the edge. He did finish behind his teammate in Hungary, but that was largely circumstantial, Hamilton refusing to cede precious seconds by letting Rosberg, on a different pit strategy post-safety car, past.

Summer break over, the whole dynamic between the pair changed at majestic Spa-Francorchamps. Initially, it
seemed that Rosberg was the real beneficiary of their clash at Les Combes while disputing the lead on the second lap of the Belgian Grand Prix. After all, he went on to finish second while Hamilton couldn’t score, stretching Rosberg’s lead to 29 points. The incident was Rosberg’s fault, for he was the one who, in attempting to go around the outside to take the lead, cut Hamilton’s rear-left tire with his front wing endplate. Crucially, the team condemned him for what happened. Hamilton, who felt after Monaco that Rosberg had got away with a professional foul and the team had let him, suddenly felt that the Mercedes squad was behind him.

“I don’t know what happened after Spa, but it looked a bit strange,” said four-time World Champion Alain Prost, himself no stranger to intra-team discord, earlier this year. “Something had changed; the dynamic had changed. Yes, it’s inevitable in a long season that you have different periods where you feel strong or weak. But if you look at the situation before Spa and after Spa, it was completely different.”

In the seven races that followed the break, Rosberg usually had the edge in qualifying, but Hamilton was brilliant in race conditions. Partly, this has to be seen in the context of experience. When Hamilton was on his way to his first world title back in 2008, he made plenty of errors even in the final run-in. Now, six years later, Rosberg started to do the same. And what happened at the start of the Russian Grand Prix was the seminal moment.

After twice going off due to braking errors while leading at Monza, handing Hamilton the initiative, then drawing a blank in Singapore thanks to an electrical problem that reared its head before the race, and then being outraced in the wet at Suzuka, Rosberg simply couldn’t match Hamilton’s pace in Sochi. But given that it was a straightforward, one-stop race and passing was difficult, had he led out of the first corner, he should have won.

Actually, he did briefly lead, but suffered an almighty lock-up and took to the runoff, then headed to the pits to replace his hexagonal Pirellis. What was extraordinary was that the move wasn’t difficult. He had the inside line, was perfectly placed. All he had to do was execute. Uncharacteristically, he couldn’t explain the error. A classic pressure-induced blunder…

Read more in The Champions Issue of RACER, on sale now. Take a video tour of the issue below…

The RACER app can be found by searching for “RACER Magazine” in the Apple, Android or Amazon App stores. The app is free and includes issue previews and the RACER.com newsfeed. Individual issues can be purchased for $1.99 and an 8-issue annual subscription is $9.99. Back issues are also available 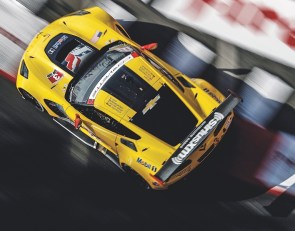