F1: Smedley "upset with myself" over Massa pit error

F1: Smedley "upset with myself" over Massa pit error

Williams performance chief Rob Smedley says he is “upset with myself” for not doing more to prevent Felipe Massa accidentally driving through McLaren’s pit during the Brazilian Grand Prix.

Massa had already been penalized five seconds for speeding in the pitlane when he lost more time at his second stop by mistakenly pulling up short of his Williams mechanics and stopping at McLaren instead. Smedley shouldered some responsibility for his driver’s error after the race, saying an unusual pitlane location for Williams at Interlagos had combined with the fact its mechanics wore a similar colour of clothing to McLaren to create confusion.

“I was more upset with myself than anyone else, because we moved pits and I sat here on Wednesday afternoon thinking about what could be different,” said Smedley. “And I missed the most glaringly obvious one, which is in the race he’s been used to stopping near a set of mechanics with black overalls in front of him, and here they [McLaren] had almost the same set of overalls on [as Williams].

“Low sun, it seemed to be about the right position when you’re heading down the pitlane at 80km/h trying to do the perfect stop, and he’s got a set of mechanics out with exactly the same set of overalls on that he’s always had and he pulled into their pit.

“There were a few words [exchanged] after that stop, but I was more upset with myself. I should have thought about it and warned them.” 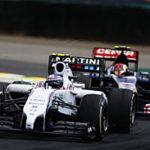 “There were a lot of niggly things thrown at us, whether we created them ourselves with Felipe’s pit stops or whether it was force majeure in the hands of God, it wasn’t a particularly easy Sunday afternoon,” Smedley added. “Ross Brawn used to say to me at Ferrari when we had bad races: ‘They’re character building’ and these certainly are.

“The main thing is you don’t cave in under pressure, because we could have absolutely caved in and got no points on Valtteri’s car and quite easily lost that podium on Felipe’s car with everything that was going on, and we didn’t – we held our nerve.

“To come out of that with a podium and 16 points showed great resolve from the team. I’m proud of how we held it together when everything around us was falling apart.”