Welcome to the first episode of Dan Gurney: All American Racer, presented by Bell. Gurney was one of the greatest drivers, innovators, thinkers, that America has produced. He remains the only American team owner to win a Formula 1 Grand Prix in his own car, and RACER‘s Robin Miller took the opportunity to accompany Gurney down the hallway of the All American Racers workshop in Santa Ana, Calif., and ask him for the stories behind some of the many hundreds of photos on the walls. The result is a six-episode series giving some insight into the genial gentleman – and gentle man – who turned All American Racers into a winner on both sides of the Atlantic. In this first episode, Dan tells Robin about the first Eagle designs. 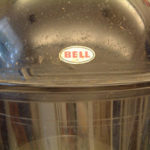 This video is presented by Bell Helmets. The famously simple logo that became simply famous did so almost subconsciously. Just as, when you purchase a car, the number of similar examples you see on the road seemingly multiplies, once you start looking for Bell logos, you spot them everywhere, be they in frayed and sepia-tinted monochrome, in early glorious and classic Technicolor or embedded in the wild color schemes on helmets of today.

But Bell’s link up with Gurney is closer than that. The man who famously used to wrap a hotel handtowel around the lower part of his face to protect him from the elements and debris was perhaps the natural choice to embrace the concept of a full-face helmet. Bell produced its first full-face motorcycle helmet in 1966, and Dan leapt at the chance to use one, debuting an all-black example (LEFT) in the 1968 Indy 500. Three years later, everyone who started the “500” was wearing Bell.

Enjoy this first episode of Dan Gurney: All American Racer, produced by Adam Friedman’s Vertical Ascent for RACER. Five more will follow on consecutive Tuesdays through May and early June.