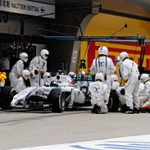 Felipe Massa has admitted that he is frustrated by the bad luck that has compromised results in the first four Formula 1 races of his Williams career.

The Brazilian was fighting in the top six in the Chinese Grand Prix but a problem at his first pit stop, when the team attempted to fit the new rear wheels to the wrong side of the car cost him almost a minute and led to him finishing a lapped 15th.

Massa has scored only 12 points this season, for seventh places in Malaysia and Bahrain, and is hoping for a reversal in fortune from now on.

“This race is another problem that has cost me points. I feel I have started well in terms of pace but I have not been lucky.”

Massa believes that the lost points could prove costly in the constructors’ championship, with Williams currently sixth on 36.

“We had the car [in China] to finish in front of Force India, and it is third in the championship, so it’s a team we need to try to be in front of and score more points than,” said Massa. “Also, it was a race in which we could maybe have caught and passed McLaren [for fifth] as well. It’s something we need to work on and try to have more consistent races and score more consistent points.”

Massa accepts that the pitstop issue is the kind of problem that a team in transition like Williams will encounter. He is hopeful that, under the direction of new head of vehicle performance Rob Smedley, such problems will be overcome.

“We need the organization and the procedures, that’s something that we are working very hard on and something I’ve tried to [help with] since the first day of testing,” said Massa. “Rob has some very important notes about things but there is some good potential and I’m sure we will make some improvements.”