IndyCar’s new officiating practice of letting its drivers sort out on-track contact appears to have created more questions than clear answers of what’s expected from them.

RACER‘s Robin Miller had an insightful interview with IndyCar race director Beaux Barfield last week and in it, he described a new policy that led to some controversy at Long Beach.

“We said before the season began that we were going to change the way we officiate and take more of a hands-off approach,” he told Miller.

The topic of Will Power’s unpunished hit-and-pass on Simon Pagenaud (BELOW) is what has led to the biggest area of confusion for Verizon IndyCar Series drivers. 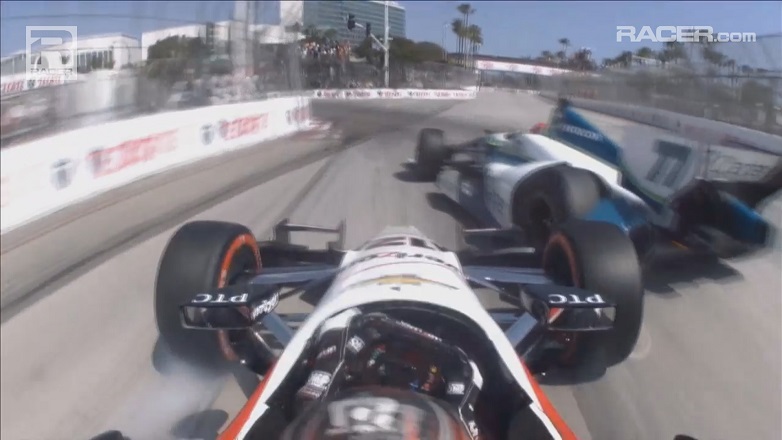 “Myself and the other two stewards (Johnny Unser and Brian Barnhart) looked at the replays and acknowledged that we would have likely called that a penalty last year but it’s something we will no longer call,” added Barfield. “It was two guys racing hard for position but we didn’t see it as malicious.”

Barfield closed with: “But the bottom line is that we don’t want races to be decided by Race Control. It’s up to the drivers to sort things out.”

His final statement has some IndyCar drivers unsure of what’s expected from them this weekend at Barber Motorsports Park.

“I’m really not sure what we’re allowed to do,” said Dale Coyne Racing’s Justin Wilson, who was knocked around more than once at Long Beach and also serves as a leader of the IndyCar drivers association. “We were told in the drivers’ meeting they didn’t want to get involved, that it’s a game of inches, and they don’t want to assign blame when it’s a close call. We said that was fine, but afterwards, we’re not sure we saw any close calls. They all looked pretty clear to us.”

Differing opinions between drivers and a race director go on during every event, but in the case of IndyCar’s drivers, we have added a question mark on how they are meant to settle their on-track disagreements.

The subtext behind Race Control’s shift in officiating practices comes from steady, and at times, unwelcome input from drivers last season. With a culture of complaining having taken over the relationship, the decision was made to put more control in the hands of those who felt they were being wronged. But without a clear mechanism to empower drivers who’ve been hit, the policy lacks teeth and substance. The goal of diffusing the hyper-critical situation has seemingly backfired so some degree, with many drivers now wanting Race Control to play a more active role in calling penalties.

“Fundamentally, I’m for as little officiating as possible,” said Andretti Autosport’s James Hinchcliffe, who was taken out in a crash at Long Beach. “I think we got to the point where drivers were bitching about small, silly things that 10 or 15 years ago, you’d never hear about Race Control getting involved. We sterilized the racing a little bit. Not that you want to encourage open-wheel cars hitting each other, but I think we have some questions now; we don’t want NASCAR’s ‘Boys, have at it,’ because retaliation in an Indy car is a whole lot different than in a stock car. I don’t think that’s what they want.”

After Long Beach, Hinch says he has a better feel for what IndyCar will penalize, but shares in the desire for clarity on what to do if he’s involved with contact.

“After reading that article, I got a better understanding of what they’re wanting to call,” he continued. “I have an idea of what they will call and won’t call. I don’t know exactly what’s expected of us if there is contact, but I know we need to have safety in mind instead of going after a guy who hit you.”

Team Penske’s Power, who hit Pagenaud in the left rear with his right front, didn’t intend to knock his former teammate out of the way after trying to back out of a passing attempt, but concedes a more definitive penalty in such instances – one that would have been an automatic call for Race Control – might not be a bad idea.

“I think we should do a similar rule like they have in V8 Supercars, where they have something that says if you turn a guy around and you aren’t up to his roll hoop (the middle of the car), or the front of his quarter panel, it’s an instant drive-through,” said the championship points leader. “We need something clear like that. Come up with a clear rule about it and use that as the standard.”

Like Hinchcliffe, Power doesn’t want to see the freedom of IndyCar’s “self-policing” turn into on-track paybacks.

“It’s just too dangerous – people will get hurt, and then you have to suspend drivers and it becomes way too serious,” Power explained. “You can’t have guys going into a race thinking they’re going to pay someone back. That’s not good and there’s just no place for it with these kinds of cars.

“I’m in no position to say anything right now because I hit Simon at Long Beach; I figured he saw me in his mirror and it’s my bad for hitting him. But no matter if it’s me or any other driver, you just can’t have a situation where drivers are allowed to think for one minute they can take things into their own hands.”

Wilson and some of the others drivers expect to bring up the calls, non-calls and open-ended policing at Barber, which should lead to some changes before the race gets under way.

“I think there’s a disconnect between what we understood as Race Control not wanting to decide the close calls and not doing anything,” said Wilson. “We need to sit down with Beaux and sort where we go from here before we race again.”

Taking the drivers’ comments and comparing them to Race Control’s new policy, it’s clear the Goldilocks Principle needs to come into play for the rest of the season. At the drivers’ behest, things were called too tight through 2013, now they’re too loose, and something in the middle would likely benefit both sides.

“There’s nothing better than having a good race, wheel to wheel, an inch apart, and getting out of the car feeling satisfied,” Wilson noted. “But when it’s like this, it leaves you frustrated and I want us to learn from this. The positive thing is we can learn and we can do better. If we can come up with some guidelines starting at Barber, we’ll be OK.”​ 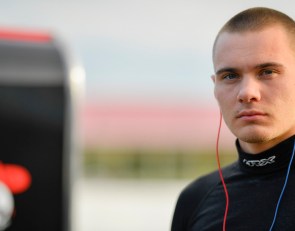