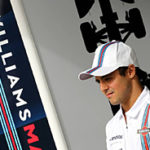 Felipe Massa does not believe the Williams Formula 1 team’s attempt to impose team orders in the Malaysian Grand Prix will damage their relationship.

Massa, who was required to cede to team orders in favor of Fernando Alonso during his Ferrari career, ignored Williams’s requests that he let teammate Valtteri Bottas past at Sepang last weekend so the Finn could attack Jenson Button’s McLaren for sixth.

Williams held talks with both drivers after the race to clarify the situation, and Massa says there will be no lingering ill feeling.

“I don’t think it damaged the relationship,” he said. “When I do something that is my mistake, I will be the first one to say sorry – and the team was the first to say sorry here.

“What happened at the last race was not correct. I’m sure the team will say that as well. I put my ideas on the table with everybody inside the team and everything was clear.

“Everything should be fine and I believe what’s happened in the last race won’t happen again until it’s the right time for it to happen. It was not the correct time at the last race.”

Asked if the instruction in Malaysia had come out of the blue, Massa replied: “This scenario was definitely not discussed before the championship.”

He underlined that he had no philosophical objection to the concept of team orders, but had felt the Sepang situation was inappropriate.

BOTTAS: YOU NEED TO PLAY BY THE RULES

Bottas admitted that the incident could have been handled better. “It always depends on the situation but hopefully we will be allowed to race a bit more [in the future],” he said.

“I think it’s clear as a team there are definitely some things we could have done better in Malaysia. But we will learn from that. Maybe the situation could have been better explained.

“I could have had a go at Button but if I couldn’t do it then maybe he would get his position back. We’ll know for the future.”

He intimated that he would have obeyed had he been given the same instructions as Massa.

“In the end, you are an employee for the team and you work for the team, so me it’s really clear what to do,” Bottas said. “Of course also you want to do your best but I think you need to play by the rules always.”