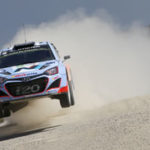 Hyundai will not have any engine upgrades for the i20 WRC before the second half of the 2014 World Rally Championship season, according to team principal Michel Nandan.

Despite guiding the i20 WRC to its first podium finish in the WRC on Rally Mexico earlier this month, Thierry Neuville said the team was well aware of the need for performance improvements to the car.

“We have some more steps to make,” said Neuville. “Yes, we were third in Mexico, but we have to be realistic and understand that we are not on the pace.

“We have seen a lot of retirements and without them we would be fifth, but we are working and we have more developments coming all of the time.”

Nandan would not be specific on the improvements coming, but there is scope for significant change to the engine courtesy of the three homologation “jokers” available to the team.

“At the moment,” Nandan said, “we are working on the test bench with the engine and looking at options. We are making general upgrades with the performance and then we decide what changes we will make.

“We are looking at software and hardware changes in the engine, but I can’t see these coming before halfway through the season.”