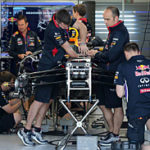 Renault’s Formula 1 teams have been given the all-clear to run their engines at full power in the Australian Grand Prix this weekend.

The French car manufacturer’s power units have had to run in a de-tuned specification so far to ensure reliability amid the teething troubles it suffered in pre-season testing. But with software modifications to address its problems having delivered improvements on the dyno since the last test in Bahrain, Renault is now confident enough about the state of its equipment to allow its engines to run unleashed.

“We were behind schedule on some of the items we wanted to have on the car, which prevented us to run to full potential,” explained Remi Taffin, Renault’s head of trackside operations. “But I think we are now sorted and we will be able to see how it will go with maximum power.”

Taffin believes the software changes, designed especially to address problems with engine knock, would not come at the expense of reliability. “Knock” refers to the sound made by an engine when its ignition timing is set incorrectly, often leading to damage inside the combustion chamber.

“The main issues we had with power units was due to the nature of how we control the engine and the boost pressure, and how we manage knock, basically – which is the step to gain some more performance from this kind of engine,” he said. “It is fair to say that when you are late, you are late on everything. So we maybe suffered a bit of lack of experience in how to deal with this situation.

“We had to be very cautious. We did not have at that time the proper software to prevent this kind of thing. But I am not worried about that one now. It is basically giving us some reliability confidence and also some performance confidence.”

Although there are hopes that the improved performance and consistency should deliver a step forward on track, Taffin was under no illusions about the amount of work still needed.

“It’s getting better, but until we win it’s not done,” he said. “It’s not because we are ahead of schedule that we have to review our plan and lower our targets. We will not be happy until we win a race.”

There have been suggestions that the Renault-engined cars might not be able to complete proper race starts because of the pre-season problems, but Taffin is confident all the French manufacturer’s cars will be able to take off from the grid in Melbourne.

“We will be OK to do some starts [from the grid],” he confirmed. “We’ve seen some good [practice] ones [in testing], it’s consistency we need.

“There are plenty of configurations. Eventually, we will find one that works.”