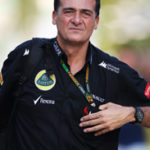 Following a management reshuffle over the winter prompted by the departure of team boss Eric Boullier to McLaren, the squad’s owner Gerard Lopez has taken on the role of team principal. Lopez has, however, been looking for someone to help support him, and has elected to promote Gastaldi to the role of deputy.

Gastaldi (pictured, LEFT) has worked as director of business development at Lotus since 2010.

Lopez said: “As a figurehead, no one better embodies the Lotus F1 team spirit. His understanding of the sport as a whole is impressive. Federico will work closely with myself and the rest of the Genii family and we’re confident of a very positive future for all.”

Gastaldi said his priority was to make sure that Lotus pushed hard with development progress throughout the 2014 season after its tough start in testing.

“We need to ensure rapid progress with our car for this season,” he said. “It’s no secret that pre-season preparations have not been as smooth as we’d like but we have confidence that we can turn this situation around very quickly.

“We need to work as closely as possible with Renault to fulfill our potential. We know it is a big challenge, especially because there is so much technology that is new to everyone, but we know the team can deliver good cars and we will do this in 2014 with Renault.”