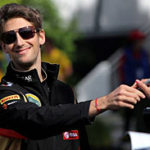 Romain Grosjean believes the unique twin-tusk Lotus has the potential to win races in Formula 1, once reliability issues with the E22’s Renault engine are solved.

The team endured a tough pre-season, skipping the first test in Jerez and losing most of its running across the two Bahrain tests to reliability problems. Grosjean, who said Lotus would be underprepared for this weekend’s season-opening Australian Grand Prix because of the car’s problems, still feels the E22 can be a front-runner when it is sorted.

“At the moment we are far from favorite to be in a good position, but that doesn’t mean that we don’t work hard and we don’t believe that we can win races,” Grosjean said in the Albert Park paddock on Thursday. “It’s hard to say. On paper yes [the car has potential to win], but so far we haven’t been able to run it properly on track.

“It has been a disastrous winter for us. Renault has their issue, we have got ours, but we’ve learned a few things from the little running we did and all those things – if we can get it right – is already a step forward. And I’m sure Renault is improving the software and things will get better there as well. The car is good.”

Grosjean accepts that a constant rate of improvement across the first event in Melbourne would represent a good weekend for Lotus, but he would prefer to have a quick car than a reliable one if given the choice.

“I would honestly prefer to be leading the race for 20 laps and then break everything, rather than being four seconds off the pace and finish the race,” he added. “It adds a little bit of pressure that you have to learn on a race weekend, which is not ideal.

“But it is what it is right now and there’s nothing we can do except take things as they come and tick the boxes as much as we can.”