The absence of GTD driver/car owner Paul Dalla Lana from the Sebring paddock has been notable. The Turner Motorsport driver has been a fixture in sports car racing, but after a rather unpleasant experience at Daytona (his race-winning Continental Tire Series GS BMW was disqualified for a technical infraction, and later, his Rolex 24 effort was wiped out due to a drive time penalty), the Canadian opted to step away from the 12 Hour.

Team owner Will Turner told RACER his client has been beyond frustrated, but could choose to drive on Friday after deciding to fly to Sebring late in the day on Thursday.

“He’s on his plane and said ‘I’ll see you in a couple of hours…,'” he said. Whether Dalla Lana, whose company Northwest helps underwrite Turner’s TUDOR Championship and Continental programs, opts to put the past behind him and race, or elects to leave IMSA behind is certainly a theme to follow.

Turner also shared his frustration on IMSA’s choice to upgrade Billy Johnson’s driver rating from Silver to Gold, forcing the talented American out of a job with the Massachusetts-based BMW tuner due to IMSA’s requirements for a specific number of pros and amateurs in each GTD entry.

“Because I’m a Billy Johnson fan, and if Paul couldn’t show up, my first call was to Billy,” Turner continued. “Then a week later, it comes out he’s been changed to Gold and we figured it must be a mistake. It took him seven or eight days to get an answer, and in the WEC, he’s Silver. The reasons he was given for the change doesn’t make sense. But I had to move on and find another driver. If I was in his shoes, it’s a huge deal. I’m having to tell him he’s out of a job; he’s fired. There should be an appeal committee. He went and asked for it to be changed. I spoke to him this morning again and told him ‘You have a job if you’re a Silver; you don’t if you’re a Gold,’ and he said they turned him down. I don’t get it.”

Driver Kenny Wilden, who was upgraded from Silver to Gold as well, also reported he lost his ride with Aim Autosport due to his pro status.

Alex Brundle, speaking to DSC this week professed himself to be very impressed with the new car with improved ergonomics cited as a plus point and “really very good visibility” reported too.

That’s going to be a key point in attracting the business from interested gentleman drivers in what is set to become an increasingly crowded marketplace in the next couple of years with the Strakka Dome S103, and the forthcoming offerings from Oreca and HPD all looking to make their mark in the LMP2 coupe stakes.

The Ligier though appears to have stolen the march on the other three projects with Onroak already looking set to have three cars racing at Le Mans this year as long as testing goes to plan.

Other customer interest is certainly apparent too with a fourth car looking likely to appear before the end of the 2014 season and with Nicolet confirming to DSC that there was “strong interest” from potential buyers on both sides of the Atlantic.

Of particular interest was the snippet that there was current potential for early sales to racers both in the USA and Europe that were currently racing in GT cars, the closed top Ligier covering off insurance concerns from some racers over open top cars.

The guessing game around a potential TUSCC taker alighted at first on Tracy Krohn, the GTLM entrant having already said on a number of occasions that he and his team were looking to evaluate LMP2 coupes for a potential future program. It appears though that a test in the Ligier is not in Krohn’s immediate plans.

Nicolet also confirmed Ligier sales to date have been in the ELMS andTUSCC, not the WEC.

The Porsche factory racing team has been busy signing up sponsors and commercial partners of late, revealing Chopard and DMG Mori on its 919 P1 cars, and now the GTLM program has gotten in on the act with the announcement of Hertz joining the program on Thursday.

One car was noticeably absent from the first practice session–the No. 48 Paul Miller Racing Audi R8–which suffered a clutch failure. The team is expected to make it out for the second session with a new clutch in place.

The general consensus among drivers is the track surface has changed greatly since teams test at Sebring late in February. Spirit of Daytona’s Richard Westbrook echoed what I heard from many others: “It’s really a case of waiting for the later sessions today to get a better feel for how much grip is available. The first session wasn’t a good indicator, honestly.”

I’ve seen plenty of tall viewing structures erected at Sebring’s Turn 1, but they’ve always been the works of the rapid 12-hour fans. Refusing to be outdone, the Ganassi team has trumped everyone by renting a hydraulic lift for Robbie Fast, the team’s spotter, to give the two-car DP team an eye in the sky on the front straight and the esses behind him.

“It beats the heck out of using a couple of ladders held together with duct tape,” Ganassi managing director Mike Hull said with a laugh. “We figured we could use some vision in that section, and with all the traffic here, you need all the help you can get so we didn’t mind going through the effort to rent the lift. Hopefully it pays off.”

“I’ve known John Gorsline for a while now, through my father, and to have my name on that list with previous recipients with such outstanding pedigrees is really, really cool and special,” said the junior Brabham who follows 2013 Gorsline winner NASCAR’s Ricky Stenhouse Jr.

Adding to Wednesday’s busy rotation of drivers moving in and out of various entries, a few more changes have taken place overnight.

Flying Lizard Motorsport has shifted promising young Briton Alessandro Latif from the No. 35 Audi R8 to the sister No. 45. Tim Pappas, who shared the second-place No. 45 FLM Audi R8 at the Rolex 24 at Daytona, has been removed from the No. 45, according to IMSA. Continental Tire Series driver Kyle Gimple, whose website continues to feature one of my favorite statements (“This talented young man has a lead foot and a heart of gold”), has been added to Muehlner Motorsports America’s Porsche GTD lineup.

Michael Shank Racing’s Ozz Negri will head home to his native Brazil after Sebring to participate in another sports car event once the 12-hour has been run. He’ll make his first start at the Interlagos circuit since 1990, partnering with Ricardo Mauricio at the Eurofarma RC team.

“I was very happy with the invitation and the opportunity to return to fly at Interlagos after so long,” said Negri. “I look forward to working with Ricardinho Mauricio and all his fantastic team personnel. The stock car series in Brazil is very big, extremely popular. The cars look like DTM cars, although they are not quite as sophisticated. They are trying to do the same thing there as the V8 Supercar series in Australia where they invite a group of drivers who are racing internationally to compete. So there will be a lot of other drivers who are racing here at Sebring this weekend who will also be there. It’s gonna be a big deal for me.

“I’m going in cold; I haven’t done any testing in this car. The team that I’m running for won the championship last year and my co-driver is last year’s champion so I will have very good people to coach me and help me to get up to speed in the car. I’m just really looking forward to it. I’ve kind of been bombarded with people who want to come to the race, on Facebook and via email. It will be so good to see so many people that I haven’t seen for a while, it will be good!”

The arrangement between Rolex 24 GTD class winners Level 5 Motorsport and Aim Autosport that has sent drivers Bill Sweedler and Townsend Bell, the No. 555 Ferrari F458 and some Level 5 crew to support the Canadian team appears to also include transference of Level 5’s Tequila Patrón North American Endurance Cup points.

Per IMSA, the series has made the move citing the following rule: “IMSA, in its sole discretion, may assign to the new Entrant the championship points earned by the competition number(s) of the former Entrant, if doing so is in the interest of competition and sports car racing.” 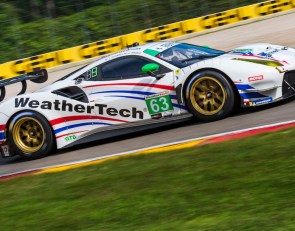 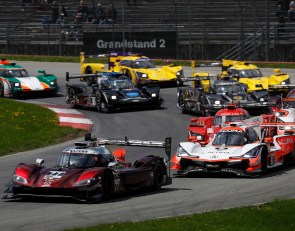 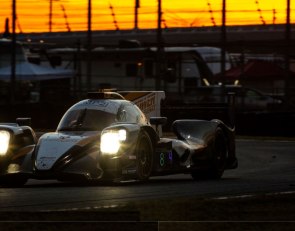